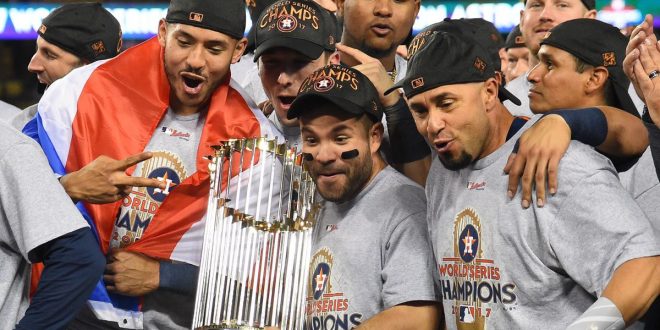 MLB Enters Last Month of Regular Season: Who’s Hot and Who Might Miss the Playoffs

The MLB regular season is coming to a close in less than a month and there’s already a clear picture on who’s making it to the postseason. The American League appears to be the stronger than the National league based solely off total wins. But, the race to see who’ll come out first in their division is tighter in the National League. Let’s take a closer look at both leagues to see who’ll make it and who’ll just miss the cut.

With the best record in the league and only six wins away from achieving 100 games in the W column, the Red Sox are looking unstoppable this season. They’ve won 23 of the last 27 games against National League teams and are atop the East division.

Sox’s outfielder Mookie Betts is definitely having his best season in his seven-year career. When a team has a player with the best batting average in their conference it makes them scary.

When you add having the 2nd most in runs, slugging percentage and on-base plus slugging percentage to that same player, it makes an opposing pitcher terrified. Betts is only 25 years old and is probably nowhere near his peak. Add other notable All-Stars like Xander Bogaerts, Jackie Bradley Jr., Steven Wright and David Ortiz then you have a Golden State Warriors-like franchise.

Now that September is finally here, the only question left to ask is whether anyone can stop the Red Sox from winning their fourth title in the 21st century. The Red Sox are currently the favorites to win it all by +300 chance, according to Las Vegas Odds.

If the Yankees were in the Western Division they’d be in first place with a solid 86-52 record over the Astros. But Boston has outplayed everyone this year. It also doesn’t help that New York has one of their best players out of the mix, Aaron Judge. Judge broke his wrist in July and has been out for  almost two months.  Although, no one really knows when he’ll return to suit up, he’s already began swinging a bat which is great news for the Yankees.

On top of that, the Yankees just played their first of a three-game series against their potential Wild-Card opponents, the Oakland Athletics. It was a great postseason preview for the exciting matchup that ended with the Yankees losing 6-3 in California. The Yankees are now 19-8 in the last 26 games against AL West.

Giancarlo Stanton went from a NL MVP season to not even being mentioned in the AL MVP race. It’s not that he’s not having a great year, he just hasn’t lived up to the MVP expectation that the Yankees acquired him for from the Marlins. He had 59 home runs last year and has just barely made it past 30 home runs this year near the end of the regular season.

First and foremost, the Houston Astros have the second best odds of receiving the Commissioner’s Trophy back to back with a +600 chance, according to Las Vegas Odds. Jose Altuve is having a sub-par season compared to last year but it’s still made him a potential AL MVP candidate. He’s 14 home runs shy of last year but to his argument, he has played in 40 fewer games thus far.

The reigning champs are sitting in first place in the Western Division with only two games ahead of the Athletics. But, the Astros do have the easier remaining schedule between both teams. The Houston Astros strength of schedule over the final 25 games, 12 of which are at home is .466. The A’s on the other hand also have 25 games but only 11 at home. Their strength of schedule is .484, according to Baseball Prospectus.

The Athletics’ have made a huge turnaround compared to last season. They finished last in their division, 26 games behind the Astros. That’s like if all of a sudden they lost these remaining 25 games to fall out of the pennant race.

Nonetheless, Trevor Cahill, Brett Anderson, Mike Friers or Blake Treinen with his unfathomable 99-mph pitches make a good squad for the A’s. I haven’t seen the A’s be this good since the movie Moneyball came out.

The Cleveland Indians are dominating this division with ease. The closest team to them are the Minnesota Twins in second place who are 14 games behind. And if that won’t make their playoff run easier, how about adding Josh Donaldson to the lineup? Because that’s exactly what they did.

They traded for the third-baseman and he’s currently in the minors and hasn’t played since May 28 because of a calf injury. The former 2015 MVP was traded from the Blue Jays and has significantly worsened since his MVP season. But, this might be a great addition for the Indians right before the playoffs.

This league can’t possibly have a tighter race between each of it’s top teams per division. Almost every squad is at most just seven games behind whoever is in first place which means that the Wild Card race is an absolute mess. The Chicago Cubs, who have the best record in the National League, still aren’t even remotely close to coasting their last 25 games. They’re only three games ahead of the Milwaukee Brewers and five games ahead of the St. Louis Cardinals.

Also, you can’t forget about the Phillies.  They’re only four games behind the first place Atlanta Braves in the Eastern Division. But, the Phillies are falling into a pit of misery. They’ve lost the last three games, including one the last place Miami Marlins. The Phillies are 9-17 since August 6, when they last led the division. If they keep this up, the Washington Nationals are only three games behind. They can eventually creep up and take their spot in the Wild Card race. But, the Phillies made a power move once they acquired Jose Bautista from the New York Mets hours before the trade deadline.

#Phillies have acquired José Bautista from the New York Mets in exchange for a player to be named later or cash considerations. pic.twitter.com/6omRskl601

Recent grad from the University of Florida. Editing all articles on here while helping out the newbies. Love all things basketball.
@@MarcoJMartinez_
Previous Florida looks ahead to 31 game win-streak against Kentucky
Next Khalil Mack: Ready to Play For the Chicago Bears