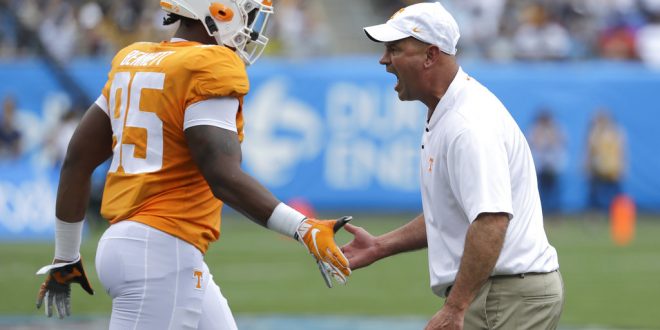 Tennessee head coach Jeremy Pruitt, right, greets Kivon Bennett (95) before an NCAA college football game against West Virginia in Charlotte, N.C., Saturday, Sept. 1, 2018. Tennessee believes it can play much better than it showed in a 40-14 season-opening loss to West Virginia. The Volunteers are hoping the lessons learned in that humbling defeat to open Jeremy Pruitt's coaching tenure can pay dividends the rest of the season. (AP Photo/Chuck Burton)

CFB Preview: Tennessee Looks to Bounce Back Against ETSU

The Tennessee Volunteers look to bounce back against the East Tennessee State University Buccaneers in their first home game of 2018. After a 40-14 loss to No. 17 West Virginia, the Vols are the only Southeastern Conference team without a win. Despite another loss to quarterback Will Grier, UT faces an in-state FCS opponent which restarted its football program in 2015.

Former Florida quarterback turned Mountaineer Will Grier got his second collegiate career win versus the Vols. Grier’s monster game, 25-for-34 for 429 yards and five touchdowns, made the Vols lack of offensive efficiency down the field hurt.

The Mountaineers managed 547 yards to the Vols 301 yards on offense. Additionally, Tennessee forced zero turnovers as issues in the secondary persisted from last season like wrapping up tackles and stopping big gains.

Pruitt said that the most improvement for football teams is usually from the first to the second week. Therefore, he looks forward to the challenge that the Buccaneers will bring to Neyland Stadium after ETSU won 28-7 in week 1 versus Mars Hill.

On the other hand, ETSU quarterback Logan Marchi went 17-29 for 273 yards and 3 touchdowns. The running game also contributed to the win after Quay Holmes and company combined for 238 yards.

Sanders and Pruitt coached together in 2013 on the national champion Florida State Seminoles team. Pruitt discussed how Sanders made him a better defensive coordinator.

All in all, Pruitt is looking for his first win as a head coach. Tennessee will have home-field advantage and will look to capitalize before a game against UTEP and the beginning of the SEC schedule with Florida, Georgia and Auburn in three straight games.