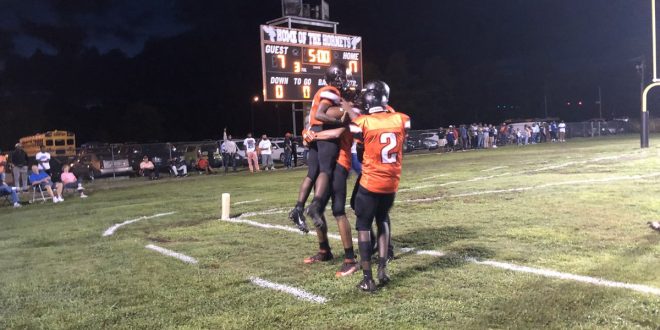 Hawthorne running back Devonte Bowie celebrates with teammates after a 37-yard touchdown. (Photo by: Zach Oliveri)

The Hawthorne Hornets stung early against P.K. Yonge with a potent running attack, led by quarterback Kahleil Jackson and running back Uveekie Fields. This backfield tandem led the way for Hawthorne, who remains undefeated on the season, in the team’s dominating 53-16 win over the P.K. Yonge Blue Wave.

It didn’t take Hawthorne long to assert themselves as the aggressors Friday night. On the Blue Wave’s first possession, Hawthorne forced a fumble and it was recovered by Marcus Williams. After two consecutive miscues in the red zone, Fields would run it into the end zone for a touchdown on a eight yard pitch. Following a stagnant drive, P.K. Yonge would get the ball back thanks to an interception by Brandon Jenkins.

However, the Blue Wave offense was in low tide early thanks to Hawthorne’s stout run defense. The Hornets were in the backfield almost every down. Then, Jackson would take it himself on the option keeper and score a 75-yard touchdown run for the Hornets. This extended the Hawthorne lead to 14-0.

The Blue Wave offense would be aided later in the first quarter thanks to a long kickoff return. They took advantage of the great field position to get on the board thanks to a rushing touchdown courtesy of running back Israel Wilcox. This score cut the Hornets’ lead in half, 14-7.

RB Angelo Wilcox puts @PKYFootball on the board with a rushing touchdown. @HHS_Football352 hold a 14-7 lead with 2:37 remaining in the first quarter. @ESPNGainesville pic.twitter.com/e1PN0CUa1D

The second quarter saw the Hornets pull away from the Blue Wave and take full control of Friday’s game. After a dropped touchdown pass and a near turnover, the Hornets settled for a 32-yard field goal to extend its lead to 10.

The Hornets would find the end zone again however with the touchdown coming from wide receiver Devonte Bowie, who took it in from 37-yards out. This gave Hawthorne a 24-7 lead. They were not even close to being done.

On the next P.K. Yonge possession, quarterback Carter Kutchko’s pass was intercepted by Hawthorne defensive back Alphonso Williams, who took it back to the 17-yard line of P.K. This great field position allowed Fields the perfect opportunity to take it in for the score on the very next play following the turnover. The Hornets lead had now grown to 31-7.

P.K. Yonge would respond, however, with a 70-yard gain on the kickoff return. This led to a tipped pass touchdown for the Blue Wave, making it a 31-13 ball game. They missed the extra point.

Just before the end of the first half, Hawthorne would put its stamp on the game. Jackson, rolling out to his left, connected with Bowie on a seven-yard touchdown pass with just seconds remaining. This gave the Hornets a 37-13 lead going into the half.

Just before the end of the first half, @HHS_Football352 QB Kahleil Jackson connects on the 7-yard roll out to WR Devonte Bowie for the touchdown. Hornets leads @PKYFootball 37-13 with seconds remaining in the half. @ESPNGainesville pic.twitter.com/dwtLf5e0r3

As the saying goes, “If it ain’t broke, don’t fix it.” This proved to be the case for the Hornets Friday night. Hawthorne kept pounding the ball, leading to two big time rushing touchdowns.

Fields found the end zone for his third of the game with 2:45 left in the third quarter, putting the Hornets up 44-13.

Then, late in the fourth quarter, Jackson capped off the night with perhaps the run of the night. Lined up at the team’s own one-yard line, Jackson found a hole and turned on the jets. He ran 99-yards for the touchdown, giving the Hornets the 51-13 lead. This would be the final score in a dominating performance for the still undefeated Hornets.

Hawthorne hopes to continue its hot start to the season next week when they host Bell High School. The Blue Wave, who suffered its first loss of the season Friday night, return home next week as they take on Bronson.