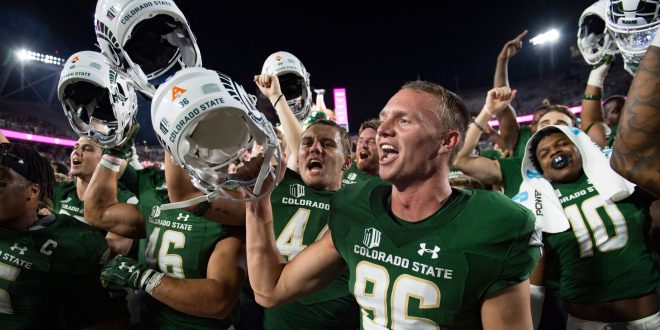 CSU Prepping for the Gators

Florida football will get ready to take on a school that former head coach, Jim McElwain coached at before he came to coach at Florida. On Saturday, the Gators will take on the Colorado State Rams, where McElwain was the head coach from 2012 to 2014.

Gator fans might be wondering why Florida football is playing the team from Fort Collins, Colorado. This has to do with McElwain.

His contract at CSU (1-2) stated that $7.5 million had to be paid in order for him to leave to coach the Gators.

The Florida athletic program agreed to pay the money. Also part of his buyout for leaving the Rams was an earned game in “The Swamp” and over 2 million dollars.

Preston Williams May Cause the Gators Issues

Rams wide receiver Preston Williams will be a scoring threat throughout the game. Williams transferred to Colorado State from the University of Tennessee. He’s no stranger to Florida. The connection he has already with starting quarterback KJ Carta-Samuels is dangerous. That connection should only improve throughout the season. Williams is a swiss army knife and proved extremely effective against Arkansas.

He is especially good at route running and finding the soft spots in the defense. His speed and size are also huge threats to Florida’s defensive backs. Florida lost Marco Wilson for the remainder of the year. Many expected Wilson to be an All-SEC caliber player before his unfortunate injury. Freshman corner Trey Dean needs to make an immediate impact in the backfield. CSU played from behind and won against Arkansas. Their passing game is a strength and they don’t shy away from attacking opposing defenses. Against Arkansas, Carta-Samuels threw just shy of 400 yards. Dan Mullen might consider playing heavy pass defense. Even if it means giving up extra yardage on the ground.

There were several memorable plays from our win vs. Arkansas.

Time for you to pick your favorite.

Watch and then vote below ⬇️ pic.twitter.com/6WgNxbaool

Key to the Game: Improvement in Execution

In the last game the Gators failed to execute well in multiple position groups. However the most issues were apparent with their ground attack. The running game has looked pedestrian over the last two weeks. Jordan Scarlett generated a lot of buzz during training camp, due to his return from his suspension last season. This would be the game for one of the running backs, Scarlett or Davis, to separate themselves from the pack . The offensive line needs to do a much better job all around. The interior line play has been suspect even in the first game against Charleston Southern. If Gators head coach Dan Mullen can get the ground attack rolling, Feleipe Franks will be poised with easier opportunities in the pocket.