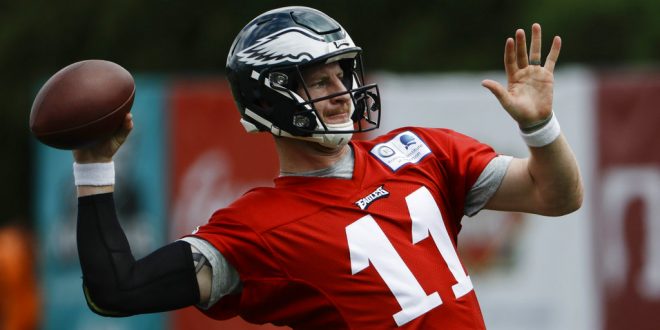 FILE - In this Aug. 21, 2018, file photo, Philadelphia Eagles' quarterback Carson Wentz throws during practice at the team's NFL football training facility in Philadelphia. Carson Wentz has been cleared to return and is slated to start for the Eagles against Indianapolis in Week 3. (AP Photo/Matt Rourke, File)

Around The NFL: Wentz Cleared, Gordon Traded To Patriots

As the NFL enters Week 3 of its season, two important storylines are taking hold of the league.

Eagles QB Carson Wentz has been medically cleared and will start Sunday against the Colts, the team announced. pic.twitter.com/Ii1roAC6gm

Much to the dismay of the rest of the NFC East, Philadelphia Eagles starting quarterback Carson Wentz is returning in Week 3.

An announcement by the team on Monday let football fans know that the former 2nd overall pick of the 2016 NFL Draft is fully cleared for contact and is expecting to start on Sunday.

The reigning Super Bowl champions have been playing average-at-best on offense without their star quarterback and his absence has definitely been noticed.

Super Bowl MVP Nick Foles hasn’t been producing the same magic so far this season that he did against the Patriots. Through two games, he’s only averaging one touchdown pass per game.

Pederson also talks about whether Wentz will have any restrictions on Sunday against the Colts:

Wentz’ effort to get back has come full circle, and his excitement was apparent through his Twitter account on Monday:

This will be the North Dakota State product’s first game back since tearing both his ACL and LCL back on Dec. 10.

Josh Gordon has officially been traded to the Patriots, per @AdamSchefter pic.twitter.com/FnDLg7YJvZ

It was announced on Monday that the New England Patriots have taken a chance on Browns wideout Josh Gordon.

The addition of Gordon should help Tom Brady’s passing attack, while the team waits for Julian Edelman to return from suspension.

The Browns’ decision to part ways with Gordon was a surprise to many at the time, but a report from the Athletic’s Zac Jackson may have a few clues as to why.

According to the report, the Browns lost trust in Gordon after he misled the team.

Gordon took part in a “hype video” shoot on Friday, injuring his hamstring in the process. The problem was, he told the team the shoot was for his “Flash” clothing line. When Gordon showed up for a team meeting late on Saturday, that was the last straw.

Another curious move from a franchise that hasn’t won a game since 2016.

The Browns will receive a 2019 5th-round pick from the Patriots in exchange for Gordon.

For what it’s worth, Gordon’s hamstring injury isn’t expected to hold him out for Week 3, so we could possibly see QB Tom Brady utilize his new weapon on Sunday.

We’ll see if the reward ends up outweighing the risk for the Patriots in the coming weeks.