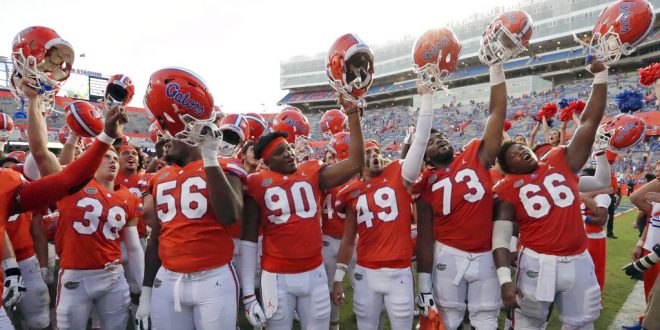 The Gators’ opponents for the 2019 regular season have officially been set.

Florida will take on the Miami Hurricanes on Aug. 31 in the Camping World Kickoff at Camping World Stadium in Orlando. They will open a season with a neutral-site game for the second time in three seasons (began 2017 season against Michigan in Dallas).

The Gators’ last meeting against the Hurricanes was a 21-16 loss in 2013 at the then-Sun Life Stadium in Miami Gardens. Miami leads the head-to-head series 29-26.

To kick off the home schedule, the Gators will welcome UT-Martin to the Swamp for the first time. The Skyhawks are one of four non-conference opponents Florida will face in 2019, including in-state rival Florida State at home.

To round out the home schedule, Florida will host Vanderbilt (Nov. 9) and Florida State (Nov. 30). The Gators are currently on a five-game losing streak to the Seminoles but will have an opportunity to snap that streak this season.

Florida On The Road

With a full home slate in 2019, the Gators also have a few key matchups on the road. Aside from the two neutral site games (Miami and Georgia), Florida will travel to face Kentucky (Sept. 14), South Carolina (Oct. 19) and Missouri (Nov. 16) on the road. In early October, Florida will pay a visit to Baton Rouge and take on LSU in Death Valley for the first time since 2016.

The Tigers won the last meeting 17-16 in Gainesville and will visit the Swamp again this season Oct. 6.

Next year’s SEC Championship in Atlanta is set for Dec. 7, and the Gators’ two bye weeks fall on Oct. 26 and Nov. 23, giving Florida two byes for the first time since 2014.