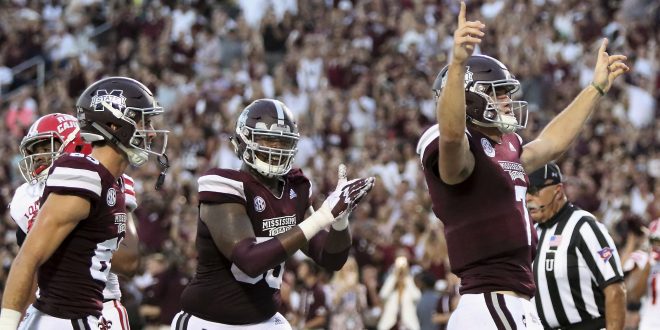 Both the Kentucky Wildcats and the Mississippi State Bulldogs have yet to taste defeat this season. Both currently hold a 3-0 record. This will be the first SEC match for Mississippi State who is currently ranked 14th on the AP Poll. Kentucky, on the other hand, is looking for their second conference win after having defeated Florida 27-16.

Kentucky is riding high following a huge win at Florida in week 2. This saw them break a 31-year losing streak to the Gators, and has given them a boost of confidence after their great start to the season. But their biggest test yet will come at home this weekend when they host No. 14 Mississippi State.

Kentucky Head Coach Mark Stoops knows that they have a big challenge ahead of them this week. He’s well aware of Mississippi State’s offense and the physicality they bring to both sides of the game.

The Kentucky defense will have to contain the Bulldogs’ offense and quarterback Nick Fitzgerald. On the offense, the Wildcats can look to running back Benny Snell Jr. who has 375 rushing yards and 3 touchdowns so far this season. As one of the top running backs in college football, he’ll be a threat to the Mississippi State defense, who have yet to face real tough opposition.

Led by senior quarterback Nick Fitzgerald, the Bulldogs’ offense has been on fire to begin the season. Fitzgerald is coming off a six-touchdown performance against Louisiana-Lafayette last weekend, including four rushing touchdowns. Additionally, the Bulldogs can count on running back Kylin Hill who’s totaled 293 yards, 3 touchdowns and is averaging 9.2 yards per carry.

Kentucky Head Coach Mark Stoops has praised the Mississippi State offense, who have outscored their opponents 150-26 in their three games so far this season. The Bulldogs have the ability to throw the ball, but also have a good rushing game.

Mississippi State will have to continue playing at this high level when they face Kentucky this weekend. This match will serve as preparation for a season where they are set to face four ranked opponents – no. 9 Auburn, no.6 LSU, no. 22 Texas A&M, and no. 1 Alabama – in the upcoming weeks.

The Mississippi State Bulldogs are a 10 point favorite in this matchup. However, Kentucky won’t shy away from being the underdog. This SEC matchup will take place on Saturday, September 22nd at 7:00 pm. You can watch it live on ESPN2.