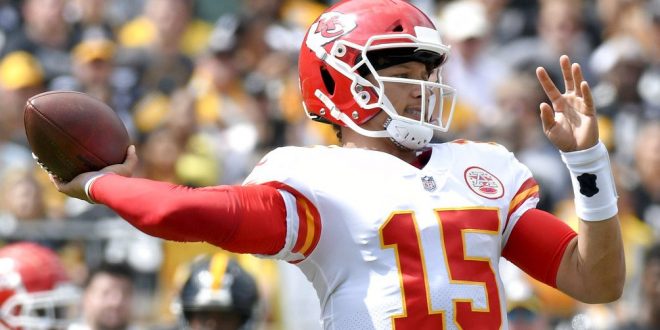 The 2018 NFL season is about to be three weeks old and teams are already starting to separate themselves.

Nine teams remain undefeated, with some coming as a surprise.

Denver, Kansas City and Minnesota have all yet to lose and are doing so with new faces at quarterback. The Chiefs’ offense has been electric with Patrick Mahomes as the signal caller. The second-year quarterback out of Texas Tech broke the NFL record for most touchdown passes in the first two weeks of the season with 10.

Meanwhile, Case Keenum has picked up where he left off in 2017 by leading the Broncos to a 2-0 record. His replacement in Minnesota, Kirk Cousins has the Vikings undefeated as well, leading his team to a comeback tie against the Packers last week in Lambeau.

Down south, the Tampa Bay Buccaneers are 2-0 after knocking off two popular Super Bowl picks, the Saints and Eagles. Ryan Fitzpatrick made NFL history in the win over Philadelphia by becoming the first quarterback ever to throw for over 400 yards and 4 touchdowns in the first two games of a season.

The schedule doesn’t get much easier for them as they host the Steelers. That’s one of many games that’s highlighted in our week 3 preview.

This matchup typically decides the winner, or at least a playoff spot, in the NFC South. After a tough week one loss, both teams bounced back to even their records at 1-1. The Saints needed a comeback to beat the upstart Browns in the Superdome 21-18, while Atlanta took care of the Panthers 31-24. Last season, the teams split the season series with both games being decided by single digits.

The Bengals weren’t a popular preseason pick to win the AFC North, but find themselves all alone on top of it. After impressive wins over Indianapolis and Baltimore, Cincy goes into Carolina with a perfect record. The Panthers, meanwhile, started off with a strong win over Dallas to open the season. However, they struggled with Matt Ryan and the Falcons and dropped to 1-1.

Expect a tight game as both teams have plenty of talent on the offensive side of the ball, while also having solid defenses.

For the first time since the mid-1990’s, two teams from LA will do battle, and this one shouldn’t disappoint. There is plenty of talent on both rosters as the Chargers and Rams boast two of the most explosive offenses in the NFL.

The Rams are a popular Super Bowl pick and rightly so. They have scored 30-plus points in each of their first two games and have football’s best defensive player, Aaron Donald. With Todd Gurley, Robert Woods and Brandin Cooks as weapons on offense for Jared Goff, expect more points against a porous Chargers defense who allow 29 points a game.

Don’t sleep on the Chargers though as Phillip Rivers has plenty to work with as well. He leads the fifth best offense in the league along with Melvin Gordon, Keenan Allen and Mike Williams.

Expect a high scoring affair out in the “City of Angels.”

Both teams have gotten off to shaky starts after high off-season expectations. New England started off the season with a strong win over Houston but ran into the buzz-saw that is Jacksonville last week and lost 31-20. The loss to Jacksonville exposed how bad the Patriots secondary is as Blake Bortles threw for 376 yards and 4 touchdowns.

A new addition to the injury report, practice squad transactions & Cyrus Jones on his return to NE.

The Lions though have been even more disappointing. After being demolished by the Jets 48-17 in Detriot in week one, a comeback effort against San Francisco in week two failed, dropping them to 0-2.

These are the kind of games that New England typically dominates. Sunday night games after a rough loss tend to bode well for the Pats (see Cincinnati, 2014). Tom Brady’s offense should get back on track, especially with the addition of Josh Gordon.

Will Fitzmagic continue for a third straight game? That’s the question surrounding this week’s Monday night matchup. It’s been eight seasons since the Bucs started 2-0 (2010), and will be looking to improve to 3-0 for the first time since 2005.

The Steelers have a much different narrative heading into this weeks game. After tying the Browns 21-21 in week one, the Steelers were shredded by Patrick Mahomes and the Chiefs 42-37. On top of that, turmoil remains in the locker room as Le’Veon Bell continues to sit out and Antonio Brown was disciplined for skipping practice on Monday.

The question will be can Tampa Bay continue their hot start while Pittsburgh will look to get in the win column.

Previous SEC Preview: Kentucky Hosts No. 14 Mississippi State
Next Texas A&M versus Alabama: Do the Aggies Stand a Chance?