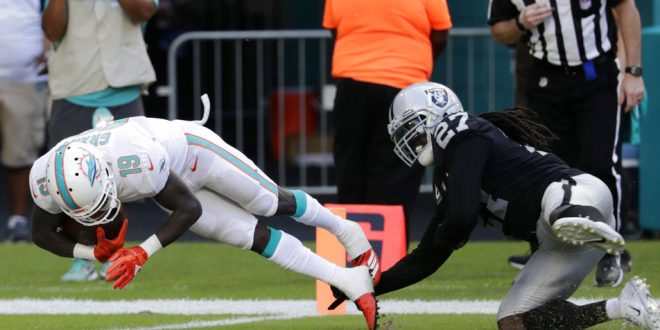 Miami Dolphins wide receiver Jakeem Grant (19) comes in for a touchdown as he is tackled by Oakland Raiders defensive back Reggie Nelson (27) during the second half of an NFL football game, Sunday, Sept. 23, 2018, in Miami Gardens, Fla. (AP Photo/Lynne Sladky)

Miami Dolphins Advance to 3-0 with Thrilling Win Over Oakland

The energy. The camaraderie. The will to win.

The Miami Dolphins are just plain fun to watch.

Fans looked on in anticipation and awe as the Dolphins transformed a 10-point deficit into a 28-20 victory against the Oakland Raiders on Sunday.

No one knows what the play was called. No one really saw it coming. But it worked.

Miami took the lead in the fourth quarter on a gimmick-play that involved four players: Ryan Tannehill, Albert Wilson, Frank Gore and Jakeem Grant. Tannehill’s only job was to hand the ball off to Gore who then flicked it to Wilson. He took care of the rest.

Wilson launched a 52-yard bomb to Grant who shook off two defenders on his way to the end zone for six.

Naturally, the crowd went wild. Even the NFL’s Twitter team enjoyed the play.

Xavien Howard Does What He Does Best

Howard is making his case as a shut-down corner in the league. He intercepted Raiders’ quarterback Derek Carr twice, with the second pick coming at a time when the Dolphins needed it most. It killed Oakland’s chance at retaking the lead.

“That was a game changer,” the cornerback told USA Today’s Dolphins Wire. “That meant everything. I think we took the soul out of them when I caught that interception.

The Team’s Chemistry is Undeniable

Before Grant crossed the goal line on a touchdown-run, Wilson appeared at his side, running in stride. The two looked at one another, smiled and gave each other a high-five. It was a picture-perfect moment for the two receivers and the fans.

Quarterback Ryan Tannehill credits the team’s closeness to the progress they’ve made and the path it’s now taking them.

Only two teams in the AFC remain undefeated. Miami is one of them. They are now sitting pretty at 3-0 and are in first place in the AFC East.

The Dolphins will face their first true test as they march into Foxborough to take on the reigning AFC champions, the New England Patriots, on Sunday.

Camille Woodhouse is a Sports and Media student at the University of Florida College of Journalism and Communications. In the past, she has covered the Atlanta Falcons and Florida Gators football for various sports news outlets. She is an Atlanta native and a fan of football.
@CJW_SportsRadio
Previous Tiger Woods Clinches 80th PGA Win
Next Rams Prevail in LA Showdown