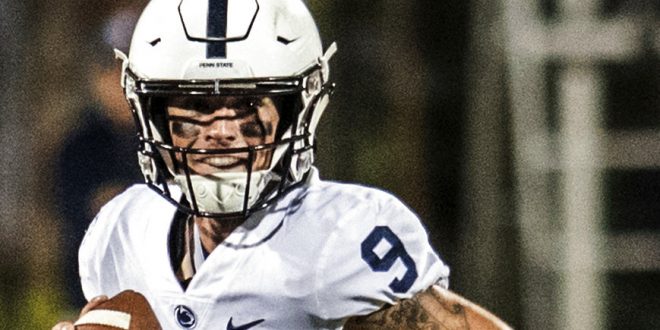 FILE - In this Friday, Sept. 21, 2018, file photo, Penn State's Trace McSorley looks for an open receiver in the second half of an NCAA college football game against Illinois in Champaign, Ill. The Ohio State-Penn State winner on Saturday, Sept. 29, 2018, will have cleared its first big obstacle in the Big Ten East race and earned an impressive victory for its College Football Playoff resume. (AP Photo/Holly Hart, File)

Week 5 of the 2018 College Football season is upon us and if it’s anything like the first four weeks of the season, it’ll be a good one.

Last week we saw Old Dominion beat then No. 13 Virginia Tech. It doesn’t get more insane than that. We saw then No. 7 Stanford beat then No. 20 Oregon in an absolute thriller that could have major College Football Playoff implications.

Oh, and don’t forget Texas Tech true freshman Allen Bowman once again put up huge numbers in a win over then No. 15 Oklahoma State just a week after throwing for over 600 yards against Houston.

This week, there are plenty of juicy matchups to dive into that will change the landscape of college football this season. So, without further ado, let’s jump into week five.

This will be a vintage Big 12 showdown. WVU features senior Heisman-hopeful Will Grier while TTU will feature true-freshman Allen Bowman at quarterback. The Red Raiders boast the nation’s number one ranked offense, averaging 624 yards per game. On the flipside, the Mountaineers average 545 yards of offense per game, ranking 8th in the country. There will be plenty of points in this affair.

Red Raiders head coach Kliff Kingsberry knows how much of a challange the Mountaniers will pose this week.

Vengeance might be on the minds of the Clemson Tigers as they host the Orange. Syracuse handed Clemson their lone regular-season loss in 2017 27-24. This season may have a different outcome.

True-freshman Trevor Lawrence will make his first start as quarterback of the Tigers after winning the job over incumbent Kelly Bryant. Lawrence, in splitting time with Bryant up until this point in the season, has shown why he was the number one quarterback in the nation coming out of high school. The Clemson offense just looks more dynamic with him calling the shots.

However, Syracuse is no pushover. The Orange are 4-0 on the year and are led by quarterback Eric Dungy. The ‘Cuse offense averages 49.5 points per game and will pose a challenge to the nation’s number three team.

Nothing screams college football more than the white-out in Beaver stadium. This will be the game the nation focuses on this week as no other contest holds as much weight as this game.

A game that typically decides the fate of the Big Ten’s East division, the matchup between the Buckeyes and Nittany Lions will feature a plethora of intriguing storylines.

Over the past two seasons, the game between these two have been decided by a combined four points. With the rivalry as intense as it is, Penn State head coach James Franklin doesn’t take the Buckeyes lightly.

First off, the quarterbacks. Penn State’s Trace McSorley is one of the top dual-threat quarterbacks in the nation and has shown up against OSU over the past two seasons.

On the flip side, Urban Meyer may have his best quarterback he’s had during his tenure at Ohio State. Sophomore Dwayne Haskins has quickly emerged as a likely Heisman candidate, throwing for almost 1,200 yards and 16 touchdowns in just four games.

This will be a dandy, to say the least.

The Fighting Irish will face their toughest test of the season when the Cardinal march into South Bend.

Both teams are coming off important road-wins, Stanford beating Oregon in Eugene and Notre Dame beat Wake Forest in Winston-Salem, and a victory this week would propel the winner into the playoff conversation.

Stanford boasts one of, if not the best, running back in the nation in Bryce Love. However, David Shaw has been relying on Junior quarterback K.J. Costello more this season. The Cardinal signal-caller has thrown for 1,056 yards and 10 touchdowns.

For the Irish, the quarterback spot has been dicey this season. After starting Brandon Wimbush for the first three games of the season, head coach Brian Kelly made the switch to Ian Brook against Wake Forest. in his debut, the junior threw for 325 yards and two touchdowns, while also picking up three rushing touchdowns.

This may be one of the weeks more intriguing matchups. BYU has surprised this season with a 3-1 record with wins over Arizona and Wisconsin. Running back Squally Canada, what a name that is, leads the Cougars offense with 322 rushing yards and 5 touchdowns.

On the flip side, Washington had CFP aspirations heading into the season. After their opening loss to Auburn, the Huskies have won three straight with big PAC-12 wins over Utah and Arizona State. Quarterback Jake Browning leads the Washington attack but it’s running back Myles Gaskin who provides the spark for the offense.

Previous SEC Preview: Tennessee Travels to Athens to Face No. 2 Georgia
Next Dan Mullen Returns to Mississippi State as Gators Face the Bulldogs