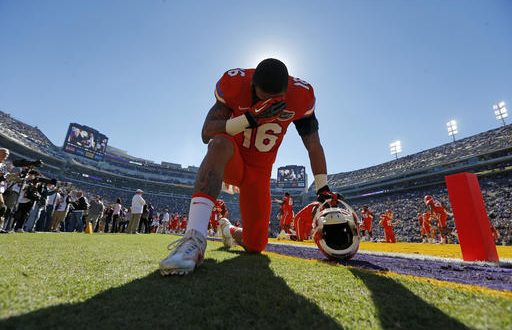 Mullen moved Swain from the outside to the slot and his talents have flourished.

Swain stayed patient during his career here. However, Florida clearly hasn’t seen his full potential until the Mullen era. Swain said he is finally in a position where he can make plays and he does so when they’re called. In the last two seasons with McElwain, Swain had only put two touch downs on record.

Under Mullen, Swain has already added another one to his stats and the Gators are only four games into the season.  Aside from Swain position change, his body has also gone through a change and he credits that all to Coach Savage.

Swain said they have been practicing hard and once the Gators get it rolling they are unstoppable. He did point out that once the Gators control the game, they have too much confidence. Yet, you can never play with too much confidence. Swain said they team just has to make collisions and hopefully it will translate. The team wants to get the “W” for Mullen considering the tension they are walking into. However, Swain said there’s only one thing to worry about this weekend.

Mullen is going to have a blast from the past Saturday night. Swain says he hopes the Gators can play a good and clean game for him as they hear those crazy cow bells in the stands. Coach said the in order for the offense to not have any negative or explosive plays, they have to string things together. Swain said they just need to be consistent, keep the ball moving. and never take steps back. Swain said he is ready to go out there and have fun.

Previous New NFL Rules Aims to Protect the QB
Next Will Winston Be Back to Take on the Bears this Weekend?