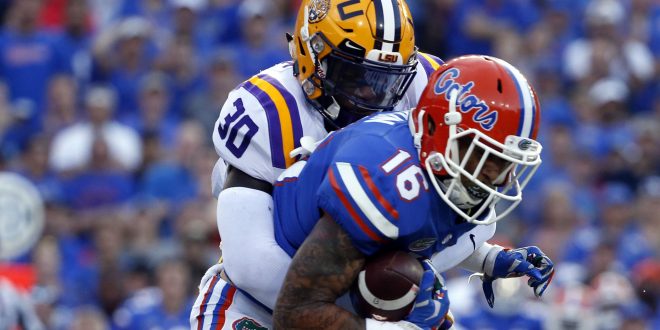 Preview: No. 22 Florida Goes For Statement Win When It Hosts No. 5 LSU

The last time the Florida Gators hosted a top-five team was a visit from at the time No. 3 Ole Miss in 2015.

Florida, ranked 25th at the time, used a raucous home crowd and an impressive performance from Will Grier to demolish the Rebels 38-10.

This time, it’s No. 5 LSU (5-0, 2-0 SEC)  who visits the Swamp, with an equally electric atmosphere expected. The combination of a rivalry game and top-25 matchup makes Saturday’s meeting between Tigers and Gators one of the more anticipated games in the Swamp in recent memory.

Both teams come in feeling good about themselves.

LSU started the season with a big win against Miami in Dallas, and has continued that momentum with conference wins at a top-ten Auburn team and at home against Ole Miss.

Part of LSU’s improvement from last season has been the leadership of junior transfer quarterback Joe Burrow.

Burrow hasn’t been flashy, but he’s been the game manager the Tigers have needed, averaging 204.6 yards per game through the air. Additionally, he’s taken care excellent care of the ball, throwing six touchdowns with no interceptions, helping LSU have the second-best turnover margin (+7) in the SEC. That ranks only behind their opponents on Saturday, the Gators (+9).

Burrow has been aided by having a steady group of playmakers on offense running back Nick Brossette (103 carries, 481 rush yards, 6 TDs) and wide receiver Justin Jefferson (18 receptions, 294 yards, 2 TDs).

Florida meanwhile got off to a shaky start in SEC play, seeing a 31-year win streak against Kentucky snapped in Gainesville 21-16.

Since then though, Dan Mullen’s team seems to have turned a page and bought in. Facing two critical road games, the Gators bounced back. They earned a road win against arch-rival Tennessee 47-21. Florida followed that up with an upset over then No.23 Mississippi State in a 13-6 defensive showdown in Starkville.

A big storyline for the Gators has been the evolvement of redshirt sophomore quarterback Feleipe Franks.

Franks played arguably one of the best games of his career in the win at Mississippi State last week. He went 22-31 for 219 yards and a pick, but demonstrated poise in the pocket and an increased ability to make good decisions.

Both Franks and Burrow will be tested by swarming defenses on Saturday though. As mentioned before, Florida and LSU lead the conference in turnover margin, with the Gators having forced the most turnovers in the SEC (14), and LSU forcing the third most (10).

Playmakers dot the depth charts for both teams. Florida defensive end Jachai Polite won SEC honors for his performance against Mississippi State. The return of David Reese and the consistency of CJ Henderson and Chauncey Gardner have made the aggressiveness of Todd Grantham’s defense pay off in the form of the top-ranked pass defense in the SEC (140 yards/game).

The Tigers are no slouches on defense either. Linebacker Devin White and cornerback Greedy Williams are two of the best players at their positions, both earning preseason first-team All-SEC honors. White is all over the field, with his 44 tackles second-best in the conference. Williams meanwhile doesn’t get thrown at a lot, but does have two interceptions so far.

Importance of the Red Zone

A key for both teams will be their efficiency in the red zone. Florida has the best red-zone offense in the SEC, while LSU has the third-worst red-zone defense. The playmaking abilities of White and Williams will be something that Franks has to be aware of if Florida wants to continue it’s 95% scoring rate in the red-zone (12 TDs, 7 FGs on 20 tries).

That’ll go a long way towards determining a game that’s been decided by one possession each of the past three years. That includes last year’s 17-16 win for LSU in Gainesville.

It goes without saying, Florida will be looking to make sure LSU doesn’t walk out with a win for a second straight year.

Native New Englander. Follow me on Twitter: @jonacosta_10
@jonacosta_10
Previous Dodgers Ready to Use Playoff Experience Against Youthful Braves
Next No. 9 Tennessee Takes Down Florida