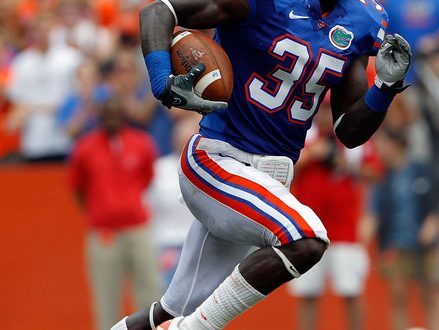 10 Years from a Championship: Ahmad Black Looks Back

More than a week has passed since the 10-year anniversary of Tim Tebow’s ‘The Promise’ speech that followed after a 2008 loss to Ole Miss.

Ahmad Black, a member of Florida’s 2008 national championship squad, started at safety and will be back in the Swamp this weekend. The team will be recognized for what they accomplished ten years ago.

Black said he could recall the loss and speech that created an electric atmosphere for the remainder of the season.

Taking a trip down memory lane

Black had a busy life which included a national title and playing in the NFL. He credited Florida- a place where he made the fondest memories – as he is back finishing up his degree.

Black looked back on what former head coach Urban Meyer wanted to implement throughout the team that season.

“What Urban wanted to instill with the guys was that life is bigger than football,” Black said.

Flashback to his playing years in the NFL

Black recalled his childhood as he dreamt of being a professional in whatever life lead him towards.

“Being blessed enough to do something I’ve always dreamed of doing, it was awesome,” Black said.

However, there are always pros and cons and as being a former NFL athlete. Black recalled some of the cons displayed through his playing years.

“One day I went in there after starting the last three games out of the four in Tampa and we were 0-4 and unfortunately I was one of the first ones to go and that taught me a lot,” Black said.

Black is thankful for his time in the NFL and reminds those who are coming up that there is more important things out there than football.

“Football is just a chapter in your life and it’s not necessary your life,” Black said.