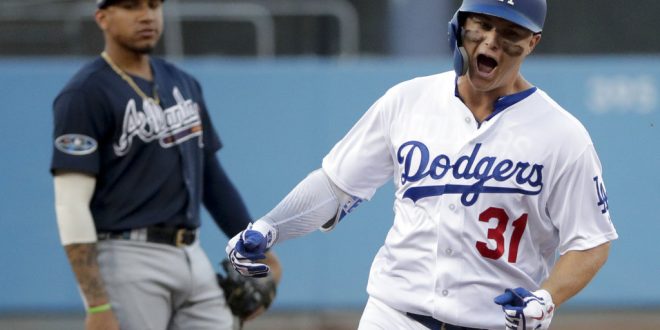 The Los Angeles Dodgers made an interesting choice on Thursday prior to their game against the Atlanta Braves.

Instead of putting the ball in Clayton Kershaw’s hands, manager Dave Roberts gave the start to Hyun-Jin Ryu.

In his fourth-ever postseason start, Ryu did not disappoint. The left-hander, who went 7-3 in the regular season with a 1.97 ERA, pitched a shutout against the NL East champions.

Roberts told the media after the game that Ryu’s command on the mound stood out to him.

“He was in control. There was a lot of soft contact,” Roberts said. “He was doing what he wanted to do, missing bats, the no walk and really competed well. It was good to see him and we needed that one.”

Behind an offensive explosion in the early going and exceptional pitching, the Dodgers beat the Braves 6-0 in the NL Division Series opener.

Literally “running” up the score

The Dodgers finished the 2018 regular season with 235 home runs as a team, which was second in the MLB. The ball club demonstrated that power hitting ability in the first couple of innings.

On the third pitch of the game, Joc Pederson launched a pitch by Mike Foltynewicz 400 feet into the stands. The very next inning, Max Muncy hit his 36th dinger of the season to put the Dodgers up 4-0.

Los Angeles had a solo home run by Enrique Hernandez in the sixth inning and put the icing on the cake with a sacrifice fly by pinch hitter David Freese in the bottom of the eighth.

Roberts praised the overall effort he has recently seen from the Dodgers, who have won five straight games.

“I mean we’ve said it, we’re playing really good baseball,” Roberts said. “All of September, I think we’ve kinda come together and offensively, defensively, the starting pitch in the pen, and this is when you wanna play your best baseball.”

The Braves had the wrong combination of poor offensive execution and subpar pitching on Thursday. Although Atlanta had more hits (6) than Los Angeles (5), they were not able to cross home plate.

Atlanta struck out 11 times throughout the game, eight of which came from Ryu in his seven innings of work:

Along with his batters failing to produce anything offensively, Braves manager Brian Snitker pointed out the number of walks his team allowed. The six pitchers who took the mound for Atlanta gave up a combined eight walks against Los Angeles.

“It hurts. We’ve been battling that for a while now. I mean it’s kinda been an Achilles heel of ours,” Snitker said. “We’ve been trying to pitch around it, through it, work on it. It’s like I say this isn’t the first game the last month or so that it’s hurt us.”

The Dodgers and Braves have a quick turnaround with the second game of the series taking place on Friday. Kershaw will take the mound for Los Angeles, while Aníbal Sánchez will get the start for Atlanta.

First pitch in Los Angeles is scheduled for 9:37 p.m.

Previous No. 9 Tennessee Takes Down Florida
Next 10 Years from a Championship: Ahmad Black Looks Back