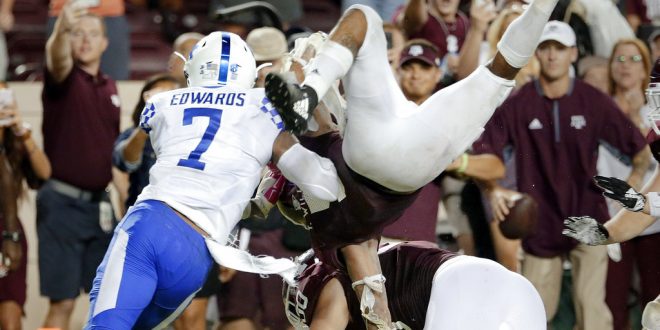 A Look Back at Wild Week 6 Around College Football

Florida’s win over LSU was just one part of an exhilarating Week 6 in the world of college football. Two other top-15 SEC teams suffered road upsets. Miami rallied for a rivalry win over Florida State, and Texas said that it’s back with its Red River Rivalry win over Oklahoma.

Saturday night was a night for upsets in the SEC.

The action then continued in College Station and Starkville, with Texas A&M and Mississippi State earning big-time wins.

The Aggies defeated previously unbeaten No. 13 Kentucky (now No. 18) in an overtime battle, 20-14. Kentucky kicker Miles Butler missed a 43-yard field goal at the start of overtime. Then, Aggies’ running back Trayveon Williams (24 carries, 138 yards) won the game for Texas A&M with a 10-yard scamper.

Two states over at Mississippi State, the Bulldogs bounced back from their loss to Florida with a dominating 23-9 win over No. 8 Auburn (now No. 21).

The Tigers got dominated on both sides of the line of scrimmage.

Offensively, they only managed 90 yards on 21 carries. Defensively, they got manhandled, giving up 349 yards on the ground. Mississippi State quarterback Nick Fitzgerald was a force to reckon with, carrying 28 times for 195 yards and two touchdowns.

Deep into Florida State’s meeting with rival Miami, it appeared they were well on their way to a statement win down in Miami Gardens. FSU led 27-7 with 11:52 left in the third quarter following a 74-yard punt return from D.J. Matthews.

Instead, it was all down-hill for the Noles from there.

The Hurricanes rattled 21 unanswered points from that moment, capped by N’Kosi Perry’s 41-yard touchdown pass to with Brevin Jordan to take the 28-27 lead with just over 11 minutes in the game.

Down 20 in the 3rd quarter ➡️ 21 unanswered points

N'Kosi Perry came up HUGE for @CanesFootball when they needed him most!

Perry’s four touchdown passes on the day led Miami, now ranked No. 16, to their first home win over FSU since 2004.

It appeared at one point that the Longhorns might choke away a much-yearned-for rivalry win at the Cotton Bowl. Texas took a 45-24 lead on the back of Sam Ehlinger’s two touchdown passes, only for the Sooners to rally to force overtime via the arm and legs of quarterback Kyler Murray (396 total yards, 5 total TD’s).

Tom Herman’s team bounced back though. Following a 7-yard TD run from Oklahoma’s Trey Sermon that tied the game 45-45, Texas took over with 2:38 left.