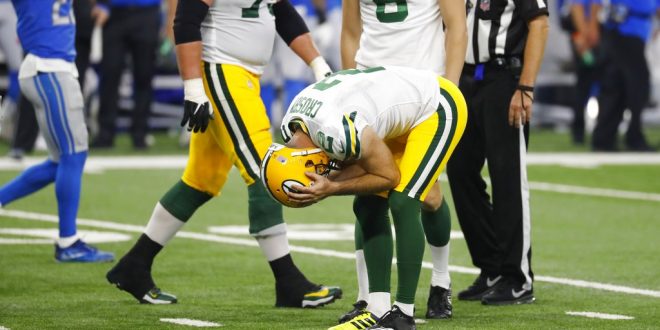 Green Bay Packers kicker Mason Crosby reacts after missing his third field goal of the day during the first half of an NFL football game against the Detroit Lions, Sunday, Oct. 7, 2018, in Detroit. (AP Photo/Paul Sancya)

Shocking plays and game-winning kicks were the headlines in Week 5 of the NFL season. Let’s take a look at the key matchups that had the biggest impact around the league:

Browns fans, as they do seemingly every year, entered the season with low expectations. After the injury to day-one starting quarterback Tyrod Taylor in Week 3 against the Jets, expectations were probably at an all-time low.

That feeling quickly changed, though, after rookie quarterback Baker Mayfield filled in and helped Cleveland to its first win in over a year. And he proved it wasn’t a fluke two weeks later.

Mayfield and the Browns entered the Week 5 matchup with the 3-1 Ravens as they always do: underdogs. But Mayfield’s touchdown and 342 yards, combined with a Greg Joseph 37-yard knuckleball kick in overtime, helped the Browns win its second game of the season.

With the win, expectations are now higher than they have been in years for Browns fans. The team has a young, but talented, quarterback and a reliable defense to back him up. The Browns will look to peak a winning record for the first time since the 2014 season against the San Diego Chargers in Week 6.

Packers quarterback Aaron Rodgers did what he always does in the Week 5 game against Detroit Lions. The 34-year-old quarterback threw for 442 yards and three touchdowns without throwing a pick. But Green Bay lost anyway.

Green Bay kicker Mason Crosby came into the game with an 80% field goal percentage in his 11 years in the NFL. Not bad. No one expected that he would miss four field goals and an extra point in the dome of Detroit.

The 13 points he costed his team would have been enough to lift the Packers to their third win of the season. The Packers now sit at 2-2-1 and questions at the kicking position.

But Green Bay coach Mike McCarthy said after the game that he is still behind his kicker.

The Pittsburgh Steelers welcomed the Atlanta Falcons for a Week 5 matchup that had the potential to be the game of the week. But it did not live up to expectations.

The Steelers routed the Falcons 41-17  with Antonio Brown catching two touchdowns and running back James Connor rushing for two more. The Steelers, who seemingly had locker room issues to begin the season, have now righted the ship.

Brown, who complained about a lack of production from the offense, can be anything but frustrated. And the Steelers seem to not be missing star running back Le’veon Bell, who is holding out with contract disputes.

The Falcons, on the other hand, are trending downward. The loss to the Steelers was their third in a row and moved them to a 1-4 record on the year. Star wide receiver Julio Jones has also yet to catch a touchdown this season, even though he leads his team in receiving yards by a wide margin.

While the quiet Jones has not complained, Falcon fans everywhere grow more and more frustrated with every game they see Jones not targeted when it counts. Second-year offensive coordinator Steve Sarkisian will need to make some adjustments before he and the rest of the team welcome the Tampa Bay Buccaneers in Week 6.