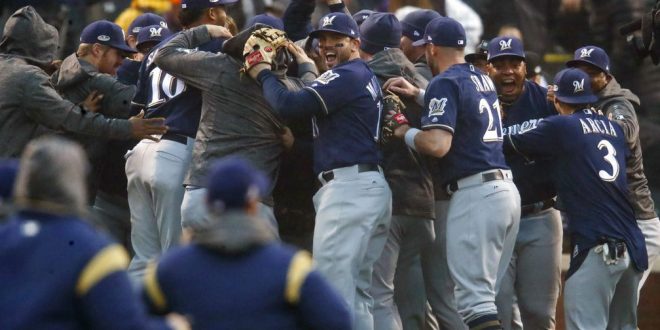 Milwaukee Brewers third baseman Mike Moustakas, back center, joins teammates in celebrating after the final out in the ninth inning of Game 3 of a baseball National League Division Series against the Colorado Rockies Sunday, Oct. 7, 2018, in Denver. The Brewers won 6-0 to sweep the series in three games and move on to the National League Championship Series. (AP Photo/David Zalubowski)

The Milwaukee Brewers are heading to the National League Championship Series for only the third time in franchise history after a three-game sweep of the Colorado Rockies.

Milwaukee was dominant in the series, outscoring Colorado 13-2. All went right for one team and wrong for the other.

A Rocky Series for the Rockies

Colorado showed some potential in the win over the Chicago Cubs in the NL wild card game. The Brewers ended any excitement that game may have caused.

The Rockies scored only two runs in the entire series (in one inning of Game 1), struck out 30 times and had 14 hits in 96 at-bats.

Colorado’s third baseman Nolan Arenado said it’s clear what the team needs to work on during the offseason.

It wasn’t how Colorado hoped things would go. The series loss was a tough pill to swallow.

Back-to-back #Rocktober appearances for the first time in club history.

But none of it matters right now. This hurts. pic.twitter.com/2ELedNRkVE

The Brewers’ Pitchers Were on Point

Shutting Colorado down in 27 out of 28 innings speaks for itself. The Rockies were shut out in consecutive games for the first time in history.

Lefty Wade Miley allowed only three hits and a walk on 64 pitches, on a lineup that typically has success with left-handed pitchers.

“These past three weeks, we’ve played every game like it’s Game 7 of the World Series. I guess it kind of prepared me for this day,” Miley told reporters. “It’s something you dream about as a little kid, and I was able to go out there and live it.”

Milwaukee’s Ready for the Next Challenge

Brewers’ manager Craig Counsell said he told his team that they deserve this opportunity.

The Brewers will face the winner of the Atlanta Braves-Los Angeles Dodgers game on Friday in Game 1 of the NLCS.

Camille Woodhouse is a Sports and Media student at the University of Florida College of Journalism and Communications. In the past, she has covered the Atlanta Falcons and Florida Gators football for various sports news outlets. She is an Atlanta native and a fan of football.
@CJW_SportsRadio
Previous Key NFL matchups in Week 5
Next Mullen Making Money Moves