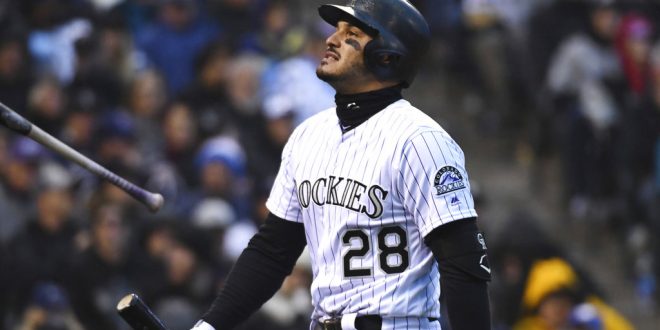 Colorado Rockies' Nolan Arenado heads back to the dugout after striking out against Milwaukee Brewers relief pitcher Joakim Soria in the sixth inning of Game 3 of a baseball National League Division Series, Sunday, Oct. 7, 2018, in Denver. (AP Photo/John Leyba)

The Colorado Rockies are a team on the rise. While they are coming off of a three-game sweep in the NL Division Series by the Milwaukee Brewers, the Rockies have a reason to be excited about the future, despite some uncertainties.

The Rockies finished second in the NL West with 91 wins — one game back from the Dodgers. The last time the Rockies got to 91 wins was in 2009 when they lost to the Phillies in the NLDS, 3-1.

Back-to-back #Rocktober appearances for the first time in club history.

But none of it matters right now. This hurts. pic.twitter.com/2ELedNRkVE

The Rockies starting pitching was dominated by aces Kyle Freeman and German Marquez. Freeman finished the season 17-7 with a 2.85 ERA, good for the eighth-best ERA in all of baseball. Marquez finished 14-11 with a 3.77 ERA. He led the team in strikeouts with 230, which was the eighth-most strikeouts in the regular season in MLB.

Wade Davis led the way for Rockies relievers, ending the season with 43 saves in 69 games.

Despite back-to-back postseason appearances for the first time in team history, the Rockies are in danger of losing their star man. Nolan Arenado’s 2-year, $29 million contract has expired. However, the Rockies are in control of his 2019 contract due to Arenado’s eligibility for arbitration, according to MLB.com.

When asked about his future after the 6-0 loss to the Brewers in Game 3 of the NLDS, Arenado said, “I know I expect to be in Spring Training with the Rockies next year.”

The 27-year-old has spent all six of his professional seasons with the Rockies, where he’s batted for a .291 average. Arenado has been an All-Star on four occasions, from 2015 to 2018.

The Rockies face the reality of giving Arenado a big, long-term deal, seeing him walk as a free agent or having to trade him away. Whatever the parties decide to do will have a massive impact on the offense and the team as a whole for the foreseeable future.