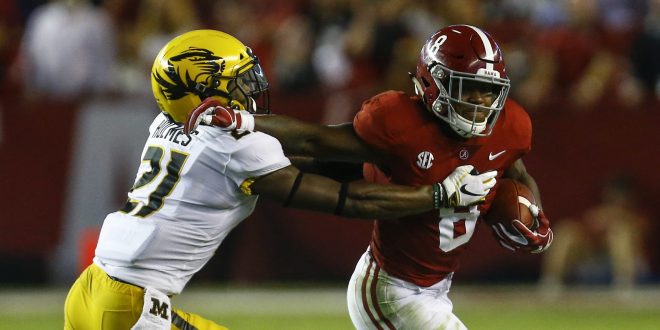 Alabama running back Josh Jacobs (8) carries the ball as he tries to get past Missouri defensive back Christian Holmes (21) during the second half of an NCAA college football game, Saturday, Oct. 13, 2018, in Tuscaloosa, Ala. Alabama won 39-10. (AP Photo/Butch Dill)

The college football season has been absolutely crazy so far! With only four teams still undefeated in the top ten, it will be interesting to see who finishes the season that way.

Lots of other teams are making statements around the country to have their voices heard.

With the season nearly halfway over, we take a look around the NCAA.

4.  Notre Dame (7-0): The Irish have already beaten three ranked opponents this season. Ian Book is completing 75 percent of his passes thus far and continues to impress people all over the country.

5. UCF (6-0): The defending “national champions” are ranked 10th overall in the AP Poll but Knight fans will tell you they should be higher. Heisman candidate McKenzie Milton continues to lead the team to their postseason dreams.

Five in a row! #GoGators pic.twitter.com/VhLRlhQVX5

Previous Gator Soccer Plays to Scoreless Draw at Alabama
Next Gators Jump to No. 11 in AP Poll