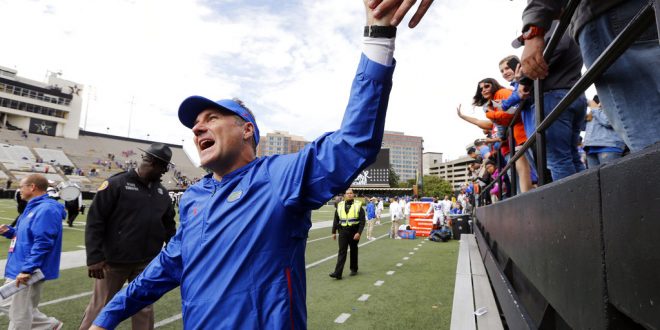 With the recent comeback win over Vanderbilt last Saturday, the Florida Gator football team jumped up from No. 14 to No. 11 in the most recent AP Poll.

A crazy weekend with four losses in the top ten, combined with Florida’s impressive win, allowed the Gators to jump three spots.

Chaos rained in Week 7 of the NCAA football season. Three upsets allowed Florida to jump the spots from 14 to 11.

The first significant loss was the upset of West Virginia and former Florida quarterback Will Grier. Grier, who entered the game a Heisman Trophy hopeful, mustered just 100 yards on 11 completions and threw the offense’s only touchdown against Iowa State. The Mountaineers now sit at No. 13 in the AP poll, a big drop from the No. 6 ranking they held the previous week.

No. 7 Washington was the next to go down after it lost to rival Oregon 30-27 in overtime. Washington held the ball first in overtime but could only kick a field goal. Oregon’s running back, CJ Verdell, ran for 6 yards for a TD to hand Washington its second loss of the season. The Huskies now sit below Florida at No. 15 with Oregon right behind the Gators at No. 12.

The third key loss of the weekend was then-No. 8 Penn State. The Nittany Lions blew their seven-point lead that they held at halftime to lose to Michigan State 21-17. The loss was their second of the season and dropped them 10 spots to No. 18.

Florida will look to cause more chaos when it faces rival No. 8 Georgia in Jacksonville on Oct. 27 after a bye week. The Gators’ 5-1 record is the result of a solid running game and great playcalling from their new head coach.

No one thought the team would get this far after a 4-7 season — and a coaching change — in 2017. All seemed lost when Jim McElwain was fired in October of the 2017 season. The Gators had lost three in a row, the most recent one being a 42-7 blowout to Georgia.

Now, almost a year later and once again facing Georgia, Florida enters the matchup ranked No. 11 with an optimistic team and fanbase. A big reason for this is new head coach Dan Mullen.

Since his hiring, Mullen has begun to change the culture both on and off the field. Mullen’s playcalling has been effective: pound the rock. Florida’s first-year head coach understood early in the season that to win, he would need to ride the studs in the backfield.

Running backs Jordan Scarlett and Lamical Perine have combined for 757 yards and six touchdowns in the first seven games of Florida’s season. Mullen’s ability to not panic and to continue to run the ball has allowed the Gators to succeed using their strengths.