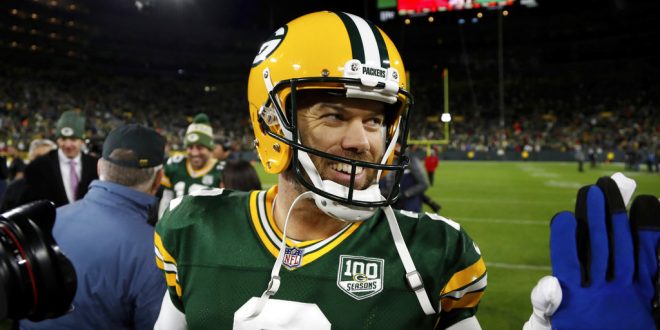 The Packers did the unthinkable… once again. Mason Crosby kicked a 27-yard field goal as time expired to outlast the 49ers 33-30 after being down 27-23 at the start of the fourth quarter. The game-winning kick was set up by Packers’ Kevin King intercepting C.J Beathard at the Packers 9-yard line. This created an Aaron Rodgers glorified momentum for an 81-yard game-winning drive.

Aaron Rodgers gained his sense of urgency after struggling for most of the game. He ultimately realized that there was a high probability that the team was about to lose to a 1-4 overall team and decided to turn up the heat.

He found Davante Adams for a 38-yard gain right out of the gun.

Aaron Rodgers took this right out of the Patrick Mahomes playbook. Don’t waste time. Just throw it down the field. pic.twitter.com/tCPguibeox

The following play he found Adams again in the end zone to ultimately tie the game with 1:55 left on the game clock.

Aaron Rodgers throws an absolute dime to Davante Adams for the TD pic.twitter.com/aYNRhRUVV8

San Francisco had a rough time during the final moments of the game in Lambeau Field. King’s interception gave enough time for Aaron Rodgers to make a comeback, 1:07 on the clock to be exact. A crucial penalty was called on 49ers’ cornerback Richard Sherman who was flagged for illegal contact. This ruled off a sack of Aaron Rodgers by DeForest Buckner on a 3rd & 15 and made it an automatic first down for Green Bay with :43 left in the game. Rodgers ran for 21-yards on the following play to extend the final drive.

DeForest Buckner gets sack No. 5.5 on third-and-long but it’s erased by an illegal contact penalty on Richard Sherman. #49ers #SFvsGB pic.twitter.com/np7NgRvYRE

Rodgers connection with Davante Adams was poetic. Both players seemed like they were communicating telepathically on two consecutive plays for 19 yards that allowed their drive to end at the 17-yard line. Rodgers admitted in the post-game conference that he was speculating that the game would head into overtime, according to Pradhan Muthanna of International Business Times.

Rodgers completed 25 of 46 passes on the night for 425 yards. This is Rodgers second consecutive game where he has thrown for 400+ yards. Another incredible stat line is that he’s thrown 12 touchdown passes in six games and remains at just one interception.

Many fans speculated and/or wanted his contract to be terminated.

But, in a huge redemption game, Crosby successfully made all three of his extra point attempts and went 4-4 in field goal attempts, including the game-winning field goal from 27-yards out.

The 3-2-1 overall Packers are heading into their BYE week which gives enough time for Aaron Rodgers to recover. He played with a brace on his left knee and also had some blood stains on his left arm sleeve. Furthermore, he even banged up his throwing hand after following through on a throwing attempt and smacking it against a 49ers defensive end’s helmet.

Nevertheless, they have a tough schedule ahead of them. They travel to Los Angeles to take on Jared Goff and the only undefeated team left in the NFL, the LA Rams. Then the following week they face Tom Brady and the New England Patriots at Foxborough.

The 1-5 49ers host the Rams next week and are already favored to lose the game. But have an easy outing the following week when they travel to Arizona to face the 1-5 Cardinals.

Recent grad from the University of Florida. Editing all articles on here while helping out the newbies. Love all things basketball.
@@MarcoJMartinez_
Previous American League Championship Series Tied heading into Game 3
Next NBA Season Opens: Lebron in LA? A Warriors 3-Peat?