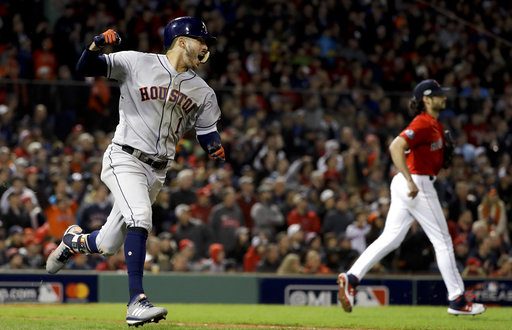 Houston Astros' Carlos Correa celebrates after his RBI-single against the Boston Red Sox during the sixth inning in Game 1 of a baseball American League Championship Series on Saturday, Oct. 13, 2018, in Boston. (AP Photo/David J. Phillip)

With the series tied 1-1, Game 3 of the American League Championship Series continues tonight in Houston.  The defending champs took Game 1 of the series with a 7-2 victory over the Red Sox. In Game 1 the Red Sox pitching staff struggled, walking nine and hitting three batters. In Game 2 however, the Red Sox bullpen was dominant on the field in Boston’s 7-5 victory on Sunday.

After the Red Sox first win of the series, Boston’s center fielder Jackie Bradley Jr. has high expectations for his team in Houston.

Red Sox right fielder and AL MVP candidate had some critics heading into Game 2 of the ALCS. Betts had a batting average of .188 in the ALDS. He looked like he was back in his groove during Game 2. After his RBI double, Red Sox nation chanted MVP as they seemed pleased with the way their AL MVP candidate performed.

Betts will need to be a threat at the plate for the Red Sox heading into Game 3 tonight as his team depends on his success to spark their offense.

Emotions at an all-time high

There are a lot of emotions heading into Game 3 and the Astros third baseman Alex Bregman took to Instagram to try and get inside of Red Sox pitcher for Game 3, Nathan Eovaldi’s head. According to multiple sources, Bregman posted a video of the Astros hitting back-to-back homers on Eovaldi earlier this season.

Alex Bregman's Instagram story is video of the Astros hitting home runs off of Red Sox Game 3 starter Nathan Eovaldi, because the last time an opposing team trolled the Red Sox it worked out so well. pic.twitter.com/4QxwaoxSSE

Boston’s manager Alex Cora said that motivation to reach the World Series should be enough for players at this point.

Eovaldi said that the social media doesn’t faze him.

Houston’s manager A.J. Hinch pointed out that he thinks the bullpens are going to play a big factor in the rest of the series moving forward.

The first pitch is set for 5:09 p.m. tonight as the Astros and Red Sox will face-off to see who will take the lead in the American League Championship series.