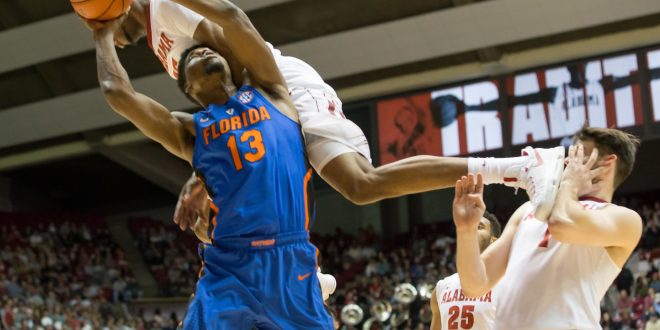 When the Florida Gators men’s basketball team takes the court this season, Kevarrius Hayes will be one of the few senior leaders on the team. The 6-foot-9-inch center, now entering his senior season, has earned a starting role on this team and heightened leadership responsibilities.

But he doesn’t feel too different as a veteran and leader on the team.

Hayes and the Gators’ first game of the year is only three weeks away against in-state rival Florida State.

Hayes As A Leader On Frontcourt

With big men like John Egbunu, Chase Johnson and Isaiah Stokes missing most of last season, Hayes was thrust into a bigger role on the court and among his teammates. This season, he’s a veteran part of a young frontcourt featuring players like Dontay Bassett and Gorjok Gak and has veteran leadership beside him in Keith Stone and others.

Hayes touched on his role and how he sees himself leading this season:

In addition to Stone, he also mentioned how Jalen Hudson is one of the players stepping into a larger role:

Focusing On His Skills

During the 2017-18 campaign, Hayes found himself matched up regularly against larger opponents and taking on other roles, causing his offensive numbers to take a dip. On the other side of the ball, though, is where he contributed the most.

With that said, Hayes said his shot blocking skills is something he can fall back on:

He said he wants to work on footwork around the basketball and finishing more:

Associate head coach Al Pinkins, who joined the Gators in May, has worked with him since arriving in Gainesville. Hayes said Pinkins has helped him add on to his skills and improving what he’s already doing well, particularly with footwork and post moves.

Jalen Hudson and Kevarrius Hayes both mentioned how instrumental Al Pinkins has been so far as the Gators' Associate Head Coach.

It won’t be long before Hayes and the Gators get back at it and put their off-season work to the test.