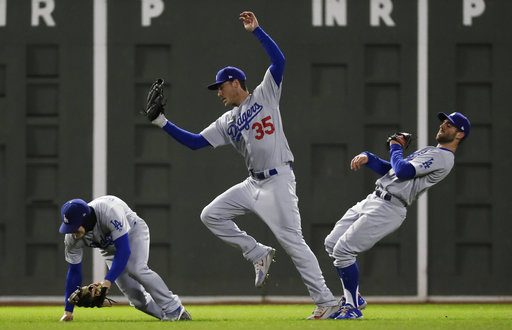 Can Red Sox Get Closer to Sealing the Deal? : World Series Game 3 Preview

The Red Sox are two games away from sweeping the Dodgers for the title. The 2018 World Series is headed to Dodger Stadium for Game 3.

Back to work. #WorldSeries pic.twitter.com/njEvGc0cXN

Red Sox Continue to Do Damage

After a win on Wednesday night, the Boston Red Sox are starting the series strong. Up by two games, only two more wins are needed for the Red Sox to bring home the World series title,  which would be their first since 2013 and fourth since 2004.

Playing in Fenway Park definitely gave the Sox an edge over the Dodgers, but they will have to work hard to keep up their winning streak as the series moves to Dodger Stadium. RHP Rick Porcello will be starting Game 3 for the Sox while RHP Walker Buehler will start for the Dodgers.

Boston’s top batters include J.D. Martinez and Mookie Betts. Although they are facing a right-handed starter for the first time this series, Boston is more focused on maintain their strong batting approach because it has seemed to work thus far.

Dodgers Have Work to Do

The stage is set. #WorldSeries pic.twitter.com/cgICMQPsm6

As the series moves to LA, the Dodgers know they have to make up for their two losses in the first set of games. The team will definitely be in better spirits playing at their home field and in their usual climate. The Dodger lineup is also reportedly one of their best. They will return three left-handed bats, with Joc Pederson at leadoff and then Cody Bellinger and Max Muncy later in the lineup.

The Dodgers have a habit of playing well when they need it the most. They began their season 16-26, but have worked their way up to being the NLCS champs. No team in the history of the World Series has come back from a 3-0 deficit, so Buehler coming together with his men to win this game is crucial.

3rd-year Telecommunications student at the University of Florida. Also a member of the Women's Track and Field team.
Previous Orlando Needs Mo Magic
Next Tampa Bay Buccaneers Look To Start New Streak Against The Cincinnati Bengals