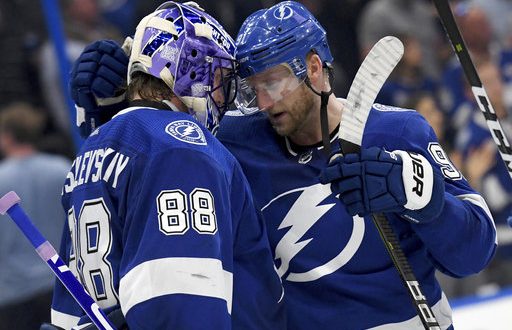 The Tampa Bay Lightning took care of business on Tuesday night as they defeated the Edmonton Oilers 5-2 at home.

Nikita Kucherov and Steven Stamkos played big roles in Tampa Bay’s victory, and they also played big roles in each others’ success. They were the two offensive stars of the night. Kucherov put up a two goal, one assist performance and Stamkos had one goal and two assists himself. Their chemistry was evident, as Kucherov’s assist was to Stamkos and both of Stamkos’ assists were to Kucherov.

For Kucherov, this is the fifth time this season he’s had two or more points in a game. The Lightning are undefeated in those five games. He’s on pace for 93 points this season, which would be the second highest of his six year career in Tampa Bay.

The Lightning jumped out to a hot start over the Oilers on Tuesday night. They had a great first period with two goals scored and no goals allowed. Stamkos got the team on the board with a goal 4:40 into the period. Brayden Point extended the lead to 2-0 with just 26 seconds remaining in the first period off assists from Yanni Gourde and Tyler Johnson.

Both times the Oilers scored in the game, the Lightning responded. Edmonton scored at 12:32 in the second period to make it a 2-1 game. Tampa Bay responded just 47 seconds later with a goal from Yanni Gourde. After a Kucherov goal made the lead 4-1 going into the third period, Edmonton made the game a little closer with goal just 40 seconds into the period. Once again, the Lightning would respond with another goal from Kucherov to put the game out of reach at 5-2.

Kucherov on Vasilevskiy: “He’s been outstanding for us. The work he puts in is just unbelievable and fun to watch. I’m happy to be on the same team.” #EDMvsTBL

The Lightning are off to a great start this season. They are 11-3-1 and are tied with the Nashville Predators for most wins by any team this season so far. They are in first place in the Eastern Conference standings. They are third in the NHL in goals per game with 3.6 and have a league-leading 54 goals this season. The Lightning, they will look to win their fourth game in a row when they host the New York Islanders this Thursday at 7:30 p.m.

Previous Florida Must Show The Ability to Bounce Back In Year Four of Mike White Era
Next Amid the Cowboys’ Struggles, Troy Aikman Calls for Change