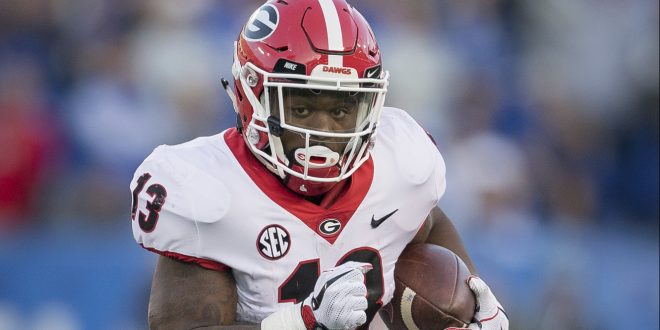 Georgia running back Elijah Holyfield (13) rushes with the ball during the second half an NCAA college football game against Kentucky in Lexington, Ky., Saturday, Nov. 3, 2018. (AP Photo/Bryan Woolston)

Ohio State vs Michigan State, Georgia vs Auburn, and Other Week 11 Matchups

With about a month remaining in the regular season, the stage is far from set in the top-25. The dust still hasn’t settled from Alabama’s trampling of LSU last week. Georgia was crowned the SEC East winner after a sound 34-17 win at Kentucky, and Texas was stunned by a last-minute strike by Will Grier.

Both teams are entering this game with something to prove. Ohio State is still shaking off their shocking 29 point loss to Purdue that threw them out of the top-4. They bounced back last week with a win over Nebraska thanks to a season high in yards and touchdowns by running back J.K.Dobbins. They face a 6-3 Michigan State team that has struggled to break through the Big Ten, and their loss to cross-state rival Michigan wasn’t helpful.

So have the Spartans improved enough to close that gap? Maybe not, but that Ohio State team was led by J.T. Barrett, who’s now on the New Orleans Saints’ practice squad. Also, Michigan State’s defense is now as dangerous as ever, so they could stand a chance.

Georgia’s loss to LSU has left them on the outside looking in for the remainder of the season. Their best bets are likely Syracuse versus Notre Dame next week or Ohio State versus Michigan in the final week.

For now, all they can do is keep winning so they remain next in line for the College Football Playoffs. They face an Auburn team fighting for a decent bowl game, but their greatest motivation is the chance to play spoiler.

This has been an underwhelming season for the Tigers, so an upset here would give them something to show. A win here could secure Gus Malzahn his job, as he’s been bating away buyout rumors all season. His struggles have been unpopular with Auburn fans, who even started a GoFundMe to support the buyout. It didn’t raise much money, but the message is received.

This game should be considered the final major hurdle for Clemson before securing a spot in the College Football Playoff. They play a Boston College team that’s not been battle tested this year. Their toughest opponent was NC State, who defeated them by five.

BC Coach Steve Addazio understands that this Clemson team is a different breed:

Clemson Coach Dabo Swinney understands it too. He has something special with this team, and isn’t afraid to acknowledge that the Tigers are playing “championship level football.”

A win against Boston College would take down their biggest threat in the fight for the ACC Championship besides Syracuse, who will probably drop a game before the end of the year based on their difficult remaining schedule. 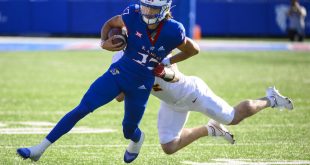