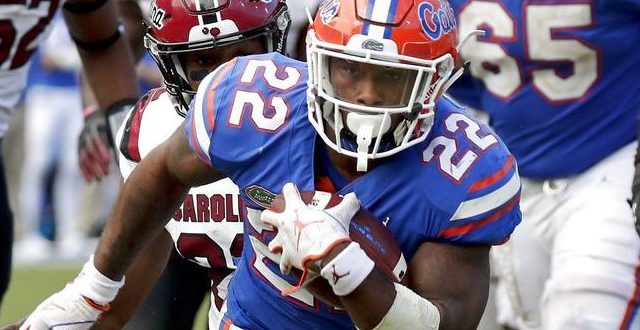 Florida running back Lamical Perine, front, breaks away from South Carolina defensive back Steven Montac, left, for a 23-yard touchdown run during the second half of an NCAA college football game, Saturday, Nov. 10, 2018, in Gainesville, Fla. (AP Photo/John Raoux)

The Florida Gators (7-3, 5-3) are riding high after an impressive 35-31 comeback victory over the South Carolina Gamecocks and are looking to take that momentum into Saturday when they host the Idaho Vandals (4-6, 3-5) on Senior Day in The Swamp.

The Gators will look to end their season playing in front of their fans in Ben Hill Griffin Stadium on a high note as they conclude their 2018 home schedule.

The Gators are coming off one of their most impressive wins of the season, coming back from 17 points to beat the Gamecocks. Florida’s ground game propelled them to victory with 367 rushing yards as they will likely rely on the run game again.

One of the biggest question marks entering the season was around the Gators offensive line play. So far this season, the unit has been up-and-down and shown inconsistencies. However, the unit is starting to play their best football of the season at the right time.

Hevesy has gotten the most of his group as they look to close the season strong. The Gators offensive line will be key for them as they close out the season.

As the long, grueling season winds down, Hevesy continues to stretch the fundamentals to his group.

In college football, it’s never wise to overlook any opponent. The Gators shouldn’t do that come Saturday against the Vandals, but it’s no question that Saturday’s game offers a great opportunity for some freshmen to get some game reps.

Under the NCAA’s new redshirt rule, a player can play in up to 4 games without losing a year of eligibility. That’s been the case with many of the freshmen Dan Mullen brought in during his first recruiting class as head coach of the Gators.

Mullen has monitored the playing time of some of his freshmen, but Saturday could be the chance some of them showcase their talents and potential.

Some of the fresh faces that could see some action on Saturday are Jacob Copeland, Andrew Chatfield, Emory Jones, Malik Langham and Richard Gouraige amongst others.

The biggest question amongst that group of players surrounds how much playing time Emory Jones will play. The freshman quarterback has seen action in two games thus far this season, allowing him to play in two more.

With two more regular season games and the bowl game remaining, the question remains to be what two games will Jones see action as the Gators look to preserve his redshirt during his first year on campus.

Prior to kickoff, the Gators will honor the 20 seniors on the squad this season.

Some notable seniors playing their final game in The Swamp are CeCe Jefferson, Martez Ivey, Tyler Jordan and Fred Johnson.

Kickoff between the Gators and Vandals is set for noon at Ben Hill Griffin Stadium.

Previous Fisher, Texas A&M have their hands full against No. 25 UAB
Next Packers Fall to the Seahawks: NFL Recap

UGA Looks to Clean Up Mistakes Over Bye Week

After falling to the Crimson Tide in a 17-point loss, the Georgia Bulldogs plan to …