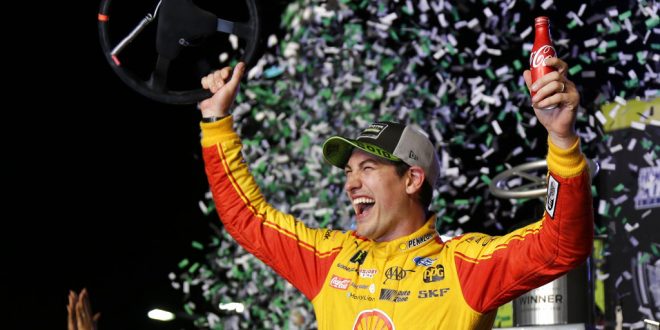 After Sunday’s Ford EcoBoost 400 at Homestead-Miami, the NASCAR Monster Energy Cup Series had a first-time champion.

28-year-old Joey Logano captured his first championship with a win at Sunday’s race, bringing home the title for the No. 22 Ford Fusion car and Team Penske.

It was a victorious moment for the Connecticut native, considering he finished as the runner-up in 2016.

The win might not have been a surprise to the confident Logano, but it was a bit of a surprise in terms of Vegas. Logano went into Homestead with the worst odds to win among the four racers still in contention, behind Kyle Busch, Kevin Harvick, and defending series champion Martin Truex, Jr.

“We did it! We won the championship. I can’t believe it.”

"We won the championship! I can't believe it!"@JoeyLogano in tears after winning his FIRST @NASCAR Cup Series championship! #TeamJL pic.twitter.com/AH5bdMJgtp

It was a self-made prophecy that came true in South Florida. Logano called his shot before the race and now will have a whole winter to celebrate his first Cup Series title in his 10 years of top-flight racing.

Native New Englander. Follow me on Twitter: @jonacosta_10
@jonacosta_10
Previous Around the NFL: One NFC Team Fizzles, Another One Shines
Next From the SEC to the Big 12: KU Hires Les Miles