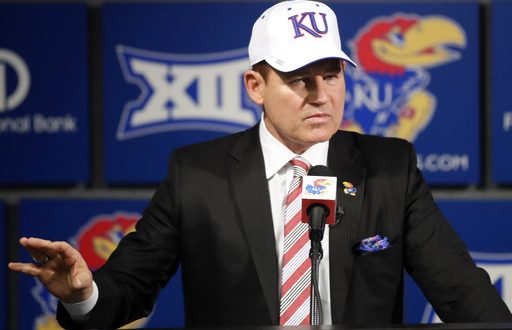 From the SEC to the Big 12: KU Hires Les Miles

Look out Big 12 Les Miles is back!

On Saturday, the Kanas Jackhawks reached an agreement to hire The Mad Hatter as their next head coach.

Miles bring an illustrious resume to a program that has experienced a good amount of success in the past decade.

The Jayhawks have not had a winning season since 2008 when Mark Mangino was the head coach. Since then, the Jayhawks haven’t won more than five games in a season. If Miles can bring some wins to the left side of the record collum, then fans would surely get behind the new coach.

Kansas has a great opportunity to start stealing recruits from K-State as well as start keeping their in-state talent in the state. With Missouri, Colorado and Oklahoma nearby this could be the time recruits start to look to play for an SEC coach outside of playing in the SEC.

Kansas loses most of their recruits to Mizzou, Texas and the in-state favorite K-State.

David Booth Kansas Memorial Stadium has been pretty much empty in the last few years. In 2017, Kansas struggled to even get 40% of the stadium filled with fans versus a hot Texas Tech team.  The fans can only take some much losing before they stop showing up hopefully, this move by KU can start to fill some of the empty seats.

Miles brings a lot of experience to the Hawks. In his 16 years as a head coach, Miles has 197 wins and won nine bowl games. He also sets the table with a lot of SEC experience and knows what it takes to send players to the NFL.

Miles has won at least 6 games in 14 of his 15 full seasons as head coach.

Kansas hasn't had a 6-win season since 2008. pic.twitter.com/2kl3qfGvcA

With the lack of success around the football program, Kansas will surely be happy if the Jayhawks can get to six wins. It will be interesting to see where the program ends up if Miles starts to have success.  Will they relight the rivalry with Mizzou? One thing for sure, this was a good move the Hawks.