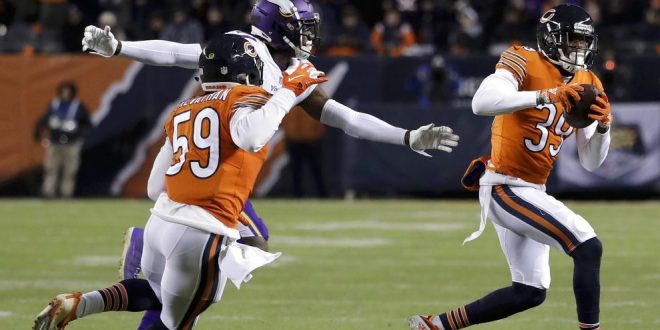 Chicago Bears free safety Eddie Jackson (39) intercepts a pass during the second half of an NFL football game against the Minnesota Vikings Sunday, Nov. 18, 2018, in Chicago. Jackson ran the ball into the end zone for a touchdown. (AP Photo/Nam Y. Huh)

Around the NFL: One NFC Team Fizzles, Another One Shines

Week 11 in the NFL brought fans heartache and hope.

What Has Happened to the Atlanta Falcons?

Once picked by Sports Illustrated to win the Super Bowl prior to the start of the season, the Falcons are not even likely to make the playoffs now.

Atlanta’s domination of the Washington Redskins in Week 9 gave reporters, analysts and fans something to be excited about. It appeared the team was back on track. But the next week’s embarrassing loss to the Cleveland Browns changed things.

Despite flashes of great play (Julio Jones doing his best Keanu Neal impression to perfection), Sunday’s 22-19 loss at home to the Dallas Cowboys deepened the wound. Dallas’ kicker hit a field goal in the fourth quarter for the win. It was another heart-breaker for Atlanta.

Coach Dan Quinn felt that the team’s mindset was right going into the matchup. But it was one more game they just couldn’t close out, and that needs to change.

The Falcons are sitting at 4-6 and will head to New Orleans to face the Saints on the evening of Thanksgiving. They will need to click on all cylinders if they hope to come away with a win, as the high-powered Saints have quickly become Super Bowl favorites.

Watch Out for the Monsters

It appears the Monsters of the Midway are back. The Chicago Bears defeated the Minnesota Vikings 25-20 in a battle for first in the NFC North Sunday night. While the offense made some key plays, the defensive performance was nothing short of dominant.

Bears’ linebacker Khalil Mack made his presence known, once again. The former Oakland Raider forced a fumble when the Vikings were in the red zone.

And he was seen tossing an offensive lineman with one hand.

When Mack was double-teamed, defensive end Akiem Hicks was there to wreak havoc. He finished the game with five tackles for loss, a third of what he had all last season.

Together, Hicks and Mack put on quite the show.

Akiem Hicks and Khalil Mack were instrumental in the Bears 25-20 win against the Vikings in Week 11.

Hicks (8) and Mack (7) combined for 15 Disruptions, the most of any defensive duo in Week 11.#MINvsCHI #DaBears pic.twitter.com/WJVIli3CWp

Safety Eddie Jackson intercepted Vikings’ quarterback Kirk Cousins and took it to the end zone for six. The heads-up play helped seal the win for the Bears.

Chicago now leads the league in interceptions with 18. They had a total of 16 over the last two seasons. They also lead the league in points off takeaways at 95.

Camille Woodhouse is a Sports and Media student at the University of Florida College of Journalism and Communications. In the past, she has covered the Atlanta Falcons and Florida Gators football for various sports news outlets. She is an Atlanta native and a fan of football.
@CJW_SportsRadio
Previous Monday Night Football Preview
Next Joey Logano Captures First NASCAR Cup Series Title