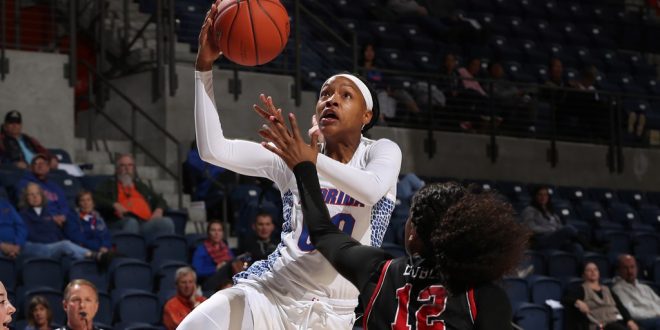 The Florida women’s basketball team has had a rough start to its 2018-2019 season.

Head coach Cameron Newbauer’s group has lost their first six match ups by an average of 10 points a game. Although the Gators have held a first-quarter lead in four of those games, they have not been able to finish down the stretch.

On Sunday, Florida will attempt to make their record 1-6 when they host Texas Tech. This game against the Lady Raiders is a part of the Big 12/SEC Challenge.

The six teams Florida has lost to are a combined 32-8 this season as of December 1. Texas Tech will be no walk in the park for the Gators either.

The Lady Raiders will march into the O’Connell Center with an impressive 5-1 record. Their average margin of victory in those five wins is 17.6 points per game.  They are averaging 78.5 points a contest on 45 percent shooting from the field, while collecting 50 rebounds per game.

Although both teams have gone in opposite directions this season, Sunday will be a test for Texas Tech as it is the first time they have played on the road.

Texas Tech has a clear advantage over Florida in one crucial area of the game; rebounding. The Lady Raiders are grabbing over 14 more boards a game than the Gators and have 21 more total offensive rebounds. Florida will focus on Brittany Brewer and Zuri Sanders, both of whom are averaging over 11 rebounds a game.

With 7⃣2⃣ total rebounds in just 6 games, Zuri Sanders sits at the top of the Big 12 and 22nd in the NCAA. pic.twitter.com/wbMpEGFNxj

Along with trying to win the battle on the glass, Florida will have to stay locked down on the perimeter. Against Indiana, Mercer and Northeastern, the Gators allowed at least 50 percent shooting from behind the arc in each game.

While Texas Tech is only 31 percent as a team from long distance on the season, they have a couple of sharp shooters to pay attention to. Angel Hayden and Sydney Goodson are both shooting over 42 percent on their three-pointers. Chrislyn Carr, the Lady Raiders’ second-leading scorer, is a respectable 33 percent as well.

Putting it together for 40 minutes

Florida is not as bad of a basketball team as the record may indicate; the Gators had halftime leads in their first two games, but were slightly outplayed down the stretch.

The Gators were down 21 points entering the fourth against Mercer, yet showed resiliency by cutting the deficit to four before ultimately losing. Against Northwestern, they even had an 11-point lead with three minutes left in the game. Unfortunately, they could not close it out against the Wildcats in overtime.

Along with focusing on controlling the backboards and playing perimeter defense, Florida has to be consistent. One of the players who has to set the tone in that area is Delicia Washington.

The junior has an impressive three games on the season shooting over 50 percent from the field. On the other  hand, she also has two outings shooting under 26 percent overall and less than 10 percent from behind the arc.

As well as getting a solid performance from Washington, Florida will look to another upperclassmen, Funda Nakkasoglu. Besides her performance against Indiana, Nakkasoglu has put up at least 21 points in her other five games. The red shirt senior from Hampton, Australia, is making 54 percent of her three-pointers and 57 percent of her shots.

Newbauer will also rely on some of his younger players against Texas Tech. Sophomore Kiara Smith has caught fire recently, scoring at least 11 points in her last two games. In the two games prior to Florida’s loss against Northeastern, freshman Kristina Moore had put up her best point totals of the season.

When comparing their statistics, the Lady Raiders have the advantage over the Gators in most of the major categories this season. If Florida is able to receive production from key players and keep up the intensity for all four quarters, however, then the team can possibly win their first game.

Sunday’s game against Texas Tech will mark the second of a four-game home stand for Florida. The Gators are 12-7 all-time against Big 12 opponents and are 1-0 in the Big 12/SEC Challenge.

Tip-off is scheduled for 2 p.m.

Previous Florida Sweeps FGCU, Headed to Sweet 16
Next The Return of #Sacksonville as the Jaguars snap seven game losing streak