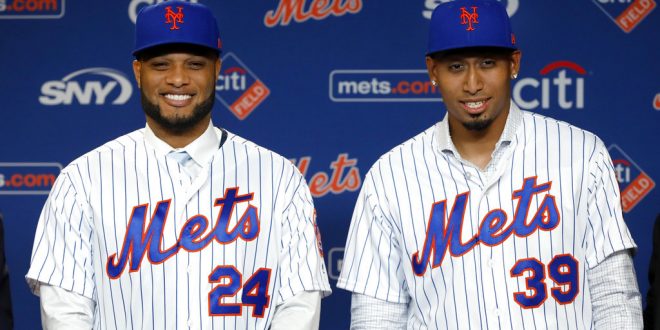 The New York Mets’ new general manager Brodie Van Wagenen and Cano already have a connection, with Van Wagenen formerly acting as Cano’s agent. During his time as an agent, Van Wagenen negotiated a $240 million, 10-year contract for Cano. Now, he’s halfway through that contract working under Van Wagenen.

I’m thrilled to join the @Mets and to be playing baseball again in NYC. This city holds a special place in my heart – my career began here, & I’m excited to continue it here. NY is the baseball capital of the world, & playing in front of NY fans is a feeling unlike any other. pic.twitter.com/35IE23b5W5

Cano is coming off of an 80-game suspension handed out by the MLB due to testing positive to the banned substance Furosemide. The 36-year-old claimed that a licensed doctor treated him with the drug, not know at the time that it was a banned substance. However, he accepted the suspension.

Cano has also received multiple honors in his 14-year career. He’s been an All-Star on eight occasions, he’s won the Silver Slugger award five times, and the Gold Glove twice.

The Mets also acquired 24-year-old closing pitcher Edwin Diaz in the same deal. Diaz had the most regular-season saves in all of baseball in 2018 with 57. Wade Davis got the second-most saves with 43.

I am grateful to the @Mariners organization for giving me the opportunity to start my career with them and for all those who believed in me. Many thanks to my coaches and my teammates. Seattle fans, thank you very much for supporting me. Blessings to all. #Grateful #ThankYouAll pic.twitter.com/Y92mdH0iWP

In just his third year in the Majors, Diaz was voted an All-Star. At 24 years of age, the Mets have a chance to develop Diaz even further.

The Mets traded away some of their former first-round draft picks to acquire Cano and Diaz. The Mets drafted Jarred Kelenic 6th overall in the 2018 MLB Draft. According to NBC Sports, Kelenic hit .286/.371/.468 with six home runs and 42 RBI in 56 games for the Gulf Coast League Mets and Kingsport Mets.

Edwin Diaz is one of the best closers in baseball, but the Mets have to ask themselves: Is this the time to trade valued prospect assets for a reliever when there's such a high volume available as FA?
Robertson, Kimbrel, Britton, Miller, etc., etc. About a dozen.

Justin Dunn was drafted in the first round of the 2016 MLB Draft.

The Mets will begin their 2019 campaign against the Washington Nationals on March 28.