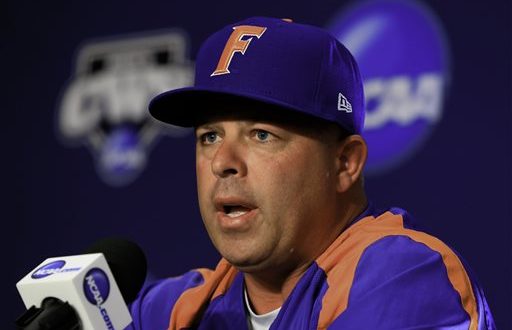 FILE- In this June 12, 2015, file photo, Florida coach Kevin O'Sullivan speaks during a news conference in Omaha, Neb. Floridas baseball program has done everything except win a national championship in eight years under Kevin OSullivan, and this year the Gators are again with a roster overflowing with talent and the consensus No. 1 ranking in the preseason polls. (AP Photo/Nati Harnik, file)

Though the team finds itself outside the top five, it ranks third among SEC teams overall. Vanderbilt ranks No. 1, while LSU sits right behind at No. 2. Other SEC teams ranked include No. 9 Georgia, No. 10 Ole Miss, No. 14 Mississippi State, No. 16 Arkansas and No. 22 Auburn.

Florida was also ranked No. 6 by Collegiate Baseball, and No. 9 by Perfect Game in their preseason polls.

A new week brings a new preseason poll. @d1baseball ranks the #Gators No. 6!

We open the season one month from tomorrow!https://t.co/biH6dGhfP6

The Gators left the 2018 season with a 49-21 record, defending their 2017 College World Series title. But a return didn’t quite pan out. Though they dominated the SEC East, they made an early exit in the third round of the 2018 SEC Tournament, with a loss to Arkansas.

Junior Wil Dalton enters the season having earned Third Team All-America honors back in December. In his sophomore year, Dalton ranked second in the SEC in both RBI and home runs. Expectations remain high after his solid performance from the previous season.

In the last 20 years, the #Gators are the ONLY @SEC program to win back-to-back regular season titles — and we've done it twice!

The 2019 season will be coach Kevin O’Sullivan’s 12th with the team as he looks to maintain a 497-229 career record. The team has topped the SEC East for two consecutive seasons.

The season opens up on February 15th at Alfred A. McKethan Stadium against Long Beach State.

Previous A Change for the Jets: New HC Adam Gase
Next No. 12 Kentucky Prepares to take on Georgia in Athens