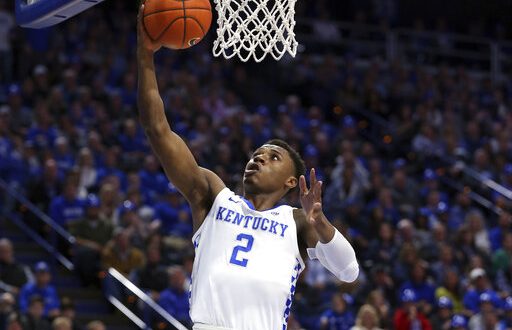 Kentucky's Ashton Hagans (2) gets an uncontested layup during the first half of an NCAA college basketball game against Vanderbilt in Lexington, Ky., Saturday, Jan. 12, 2019. (AP Photo/James Crisp)

No. 12 Kentucky Prepares to take on Georgia in Athens

With the Kentucky Wildcats jumping from No. 18 to No. 12 in the most recent Associated Press Poll, there is a lot of pressure on the Wildcats as they face the Georgia Bulldogs on Tuesday.

The Wildcats are 2-1 in SEC play while the Bulldogs are the reverse, 1-2, after losing to No. 3 Tennessee and No. 14 Auburn. Kentucky’s one conference loss this season was against Alabama (77-75). The Wildcats have yet to face a highly competitive team in the conference while the Bulldogs have had two-ranked competitions. Furthermore, Kentucky’s lost against Alabama was an away-game, and the Wildcats will play Tuesday’s game in Athens.

“It’s a tough week for us, going on the road. I’m anxious to see how we respond because we got two tough opponents (Georgia and Auburn),” Kentucky head coach John Calipari says.

Kentucky is 10-0 at home, but take the Wildcats out of Rupp Arena, and they are inconsistent. Kentucky is 1-1 on the road this season losing to Alabama but winning in Louisville and 1-2 in neutral sites (defeating UNC but losing terribly to Duke and Seton Hall).

Calipari says he is worried going into Tuesday’s matchup because of Georgia’s strong fan-presence at home games.

At the beginning of the season, freshman Ashton Hagans was struggling to find his rhythm and play consistent basketball. But recently, it is clear on the court, he is more comfortable and focused during games.

“And all of a sudden, over the month, he [Hagans] starts to get it. He starts to realize we have a better feel for what he is as a player and now, he just plays to his strengths. Like I said, he’s playing as well as anybody we have on our team, ” Calipari says.

The freshman guard won Freshman Player of the Week for the for the second time this season. In Kentucky’s two games last week, Hagans has been one of the leaders on the offense, locking in 15 points, dishing four assists and grabbing four rebounds against Vanderbilt and then contributing 18 points, five assists and one rebound against Texas A&M.

While Calipari is proud of Hagans, he emphasized to his team the two weeks Hagans was recognized, he had five turnovers in a game. Calipari says he wants the team to work together and not feed the ball to one player because he is being highlighted.

“Play to your strengths, we’ll work on the weaknesses at practice,” Calipari says.

The Georgia Bulldogs will host the Kentucky Wildcats at 7 p.m. on Tuesday, Jan. 15.

@sophialafrance
Previous Florida Baseball Ranks No. 6 In Preseason Poll
Next Florida Hits the Road to Take on No. 24 Mississippi State