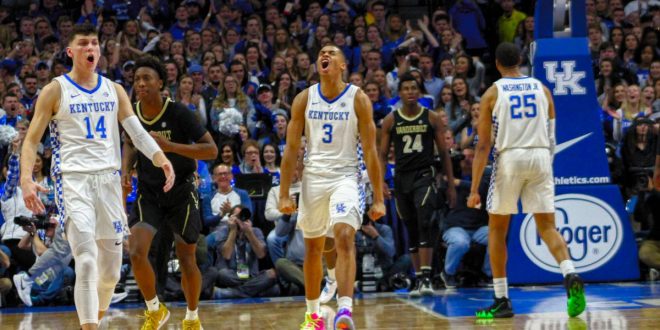 No. 8 Kentucky Hosts No. 22 Mississippi State in SEC Battle

Defensively, they rank in the top 100 in the country in turnover percentage, two-point percentage, block percentage, and offensive rebounding percentage. The Wildcats only give up 68.2 points per game. This is impressive considering they have played the likes of Duke, North Carolina, Louisville and Auburn.

The Wildcats have an effective field goal percentage of 54.2%, which ranks inside the top 50. Unlike last year, they have multiple offensive options. Keldon Johnson is their most versatile offensive player. He attacks the basket with authority and is a deadly three point shooter at 39.0%.

His freshman counterpart, Tyler Herro, hasn’t been as efficient and effective as Johnson. However, he is certainly a guy that you don’t want to leave open. His 33.3% three-point shooting is right around average at the college level, but he came into Kentucky as a big-time shooter.

While the Wildcats don’t have a big name guy like John Wall or Karl-Anthony Towns, their depth has given them the opportunity to be successful.

"We've got a chance to make a statement. A MAJOR statement."

We made one Saturday, and now we have another must-see chapter in #TheJourney to show you how we did it. #DreamBIG pic.twitter.com/0IjGfv4tjg

The Bulldogs are very dominant shooting the ball. They have an effective field goal percentage of 55.7%, which ranks 23rd in the nation. They also connect on 38.3% of their attempts from beyond the arc. Along with these stellar shooting splits, they rank in the top 65 in the nation in offensive rebounding percentage, two-point percentage, and free throw percentage.

Defensively, the Bulldogs are very solid. They force a ton of blocks and steals and play as a unit. They don’t have any big time interior presence, but they are gritty and get the job done.

The game will be played at 7:00 p.m. at Rupp Arena in Lexington, Kentucky.

Previous Baseball Hall of Fame to be Announced on Tuesday at 6 p.m. ET.
Next No. 18 Ole Miss Travel to Tuscaloosa to Take On Alabama