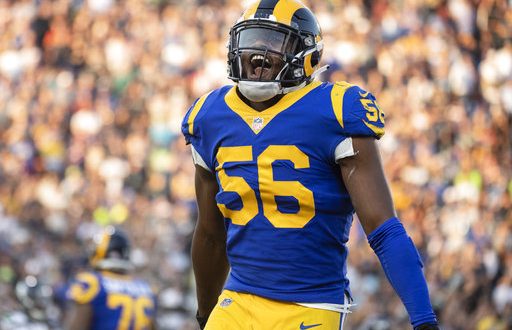 After a heart breaking loss in the AFC Championship last year, former Florida Gator and Jacksonville Jaguar, Dante Fowler will have a chance at redemption.

Fowler came up big for the Rams in the NFC Championship. Fowler ended the game with five tackles and half a sack but his big play in overtime helped send his new team, The Los Angeles Rams to the Super Bowl.

During the first drive in over time, Fowler came up with a big-time pressure on Drew Brees which forced the veteran to throw up a bad pass that was picked by defensive back John Johnson III.

That interception led to a game winning drive ending with a 57-yard field goal kick from Greg Zuerlein.

Representing the Gators at the Super Bowl

The Gator Nation well remembers the days that Fowler dominated any offense that would come to the Swamp. But is he ready to dominate an elite Patriots offense on football’s biggest stage?

“The SEC is the best conference in college football hands down, so I feel like playing for Florida in the SEC did help prepare for this moment. A lot of players in SEC are just ready and the experience and coaching staff is too much to apprehend but it did help me to get here.”

During his three years as a Gator, Fowler had a total of 140 tackles, 14 sacks, and 5 forced fumbles. After the 2014 season, Fowler was drafted third overall by the Jacksonville Jaguars. During his years at Florida, he credits all of his development to now Falcons’ head coach Dan Quinn

“Dan Quinn recruited me in high school. Just things like with him everyday, he taught me things like how to be the player I am now. Its a lot experience and thanks to him I was ready for the next level.”

Not every player has the luxury of lining up next to Aaron Donald, Ndamukong Suh and Michael Brockers.

For Fowler he has dream defensive line in order to see the eliteness shown when he was at the Swamp.

The Rams have been using Fowler as a complimentary piece to Suh and Donald instead of being a pass rusher. Since being traded to the Rams, Fowler recorded three sacks, eight hits on the quarterback, and eight tackles for loss.

Fowler will have a good opportunity to make his presence felt at the Super Bowl.

With the Patriots O-line being at the best its been all season it is going to be rough pressuring Tom Brady, but Fowler might find some holes.

Being set to be a free agent in March, Fowler is going to try to make some noise in order to get a nice pay day.