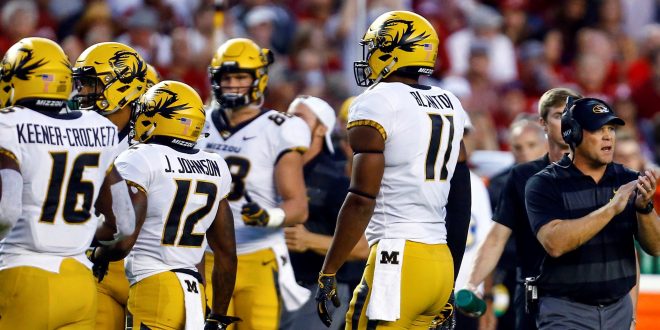 FILE - In this Saturday, Oct. 13, 2018, file photo, Missouri head coach Barry Odom reacts as the players walk off the field during the first half of an NCAA college football game against Alabama in Tuscaloosa, Ala. The Tigers have lost three games in a row, largely because of unforced errors and sloppy play. A win against Memphis is key for Missouri to turn its season around. (AP Photo/Butch Dill, File)

On Thursday, the NCAA announced that the University of Missouri’s football, baseball, and softball teams will be banned from competing in the post-season this year. In addition, the university’s athletic department will be placed on a three-year probation. This comes after NCAA investigations concluded that Missouri committed academic fraud.

A former tutor for the University of Missouri completed academic work for 12 student-athletes, which is a violation of the NCAA ethical conduct and academic misconduct. The tutor stated that she felt pressure to make sure that the athletes passed their courses in order to stay eligible to play.

The type of work that she completed included assignments, quizzes, and exams. She even took an entire course for one athlete and completed parts of a math placement test for two athletes that would keep them out of a remedial class.

The tutor was a former Missouri graduate student who received her master’s in mathematics education. In late 2010, the university hired her as a part-time teacher and math tutor for the athletics department.

From 2010 to 2016, she tutored on and off for the department until she resigned on Nov. 7, 2016. This came five days after she self-reported her actions to the Missouri compliance office that she had violated NCAA rules.

The NCAA did not disclose the tutor’s name in the report because of her repeated threats to leak details about the case.

In addition to the post-season ban and three-year probation, Missouri and the tutor have to comply with the following penalties:

All eyes are on seniors on the football, baseball, and softball teams after the release of these sanctions.

The NCAA allows for student-athletes to freely transfer if they would spend the rest of the college careers under post-season sanctions. This NCAA rule allows athletes to transfer without losing any eligibility at their new school.

One of the biggest names at Missouri is quarterback Kelly Bryant, who recently transferred from Clemson in December. Despite the sanctions, Bryant is planning to stay at Missouri for now, according to The State.

Senior defensive back Khalil Oliver took to Twitter to express his feelings.

The University of Missouri’s athletic department is looking to appeal the NCAA. The penalties cannot take effect until Missouri’s immediate appeal is reviewed, which is expected to happen in the next few weeks.

In order for Missouri to not receive the penalties they must prove one of four things:

However, due to the scale and complexity of the case, the appeal can take months to possibly half the year to get a resolution.

I am a fifth-year journalism major, specializing in sports and media. My favorite sport to watch and cover are college and NFL football. When I'm not doing that, I enjoy hanging out with my cat, going to concerts and traveling.
@sportsabrina
Previous Magic Defeat Pacers to Snap Four-Game Losing Streak
Next Latest NBA Trade News: LeBron is Back, Porzingis headed to Dallas