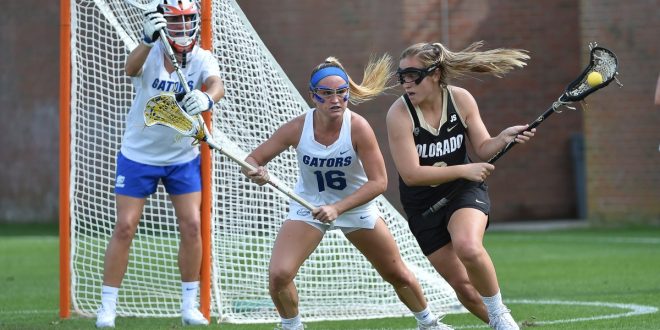 The No. 6 Gators lacrosse team begins their 2019 season this Saturday, February 9, in Colorado as they take on the No. 17 Colorado Buffaloes.

In 2018, Florida finished with overall 17-4 record and were crowned Big East Conference Champions after going undefeated in conference play.

#FLax is set to become an affiliate member of the American Athletic Conference in 2019.#AmericanWLax #GoGators

Florida lacrosse head coach Amanda O’Leary said the move to the American Athletic conference gives her team the ability to play more out of conference opponents.

Offensively Florida is led by senior attacker Lindsey Ronbeck who averaged 3.61 goals per game in 2018. Ronbeck was the Gators leading scorer last season with 65 goals.

After a record-breaking season in 2018 with 178 saves, setting the Florida single-season record, @GatorsLAX senior Haley Hicklen has been named 2019 #AmericanWLax Preseason Goalkeeper of the Year!

Coach O’Leary expressed the high expectations for her team with the large amount of returning players.

Florida’s last meeting with Colorado in the second round of 2018 NCAA tournament resulted in a 13-9 Gator victory and NCAA quarterfinal berth. Meanwhile, Colorado has a strong defense led by 2018 IWLCA Goalkeeper of the Year Julia Lisella. She led the PAC 12 with a 50.3 save percentage in 2018.

Offensively the Buffs are led by senior attacker Miranda Stinson. Stinson scored 58 goals, 19 assists, and 34 groundballs in the 2018 season.

Previous Buzzer Beater: Buchholz Boys Hoops Falls Short Against P.K. Yonge, 52-49
Next No. 2 Florida Gymnastics Aims to Bounce Back Against No. 12 Auburn