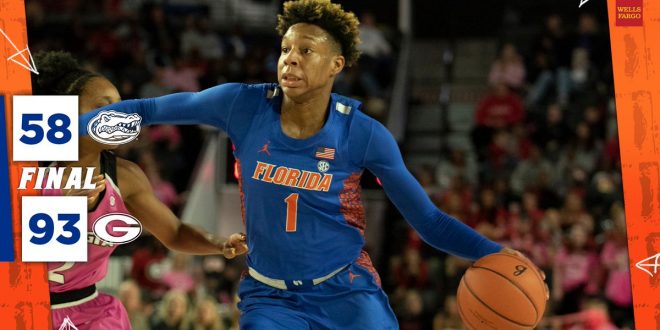 Florida just could not stop Georgia on the offensive end as the Bulldogs scored 20 or more points in each quarter of action.  Offensively, the Gators hit some highs and lows throughout the game. Four players landed in double figures, but it was not enough to keep up with the Bulldogs’ red-hot offense.

Leading the Gators in scoring was freshman guard Kiara Smith with 15 points; she also added seven rebounds.  It was here sixth double figure scoring game of the season.

Following behind her were three other Gators, Funda Nakkasoglu, Delicia Washington, and Emanuely De Oliveira who all ended the game as double figure scorers for Florida.  This was also the eighth game of the season where the Gators have hit from the 3-point line in double-digits as they hit 11 long balls on the day.

Despite sharing the ball on offense, the Gators defense could not keep up with the Bulldogs as they shot 50 percent from the field or better in all four quarters of the contest.

Kiki Smith leading the way for Florida with 15 points. The sophomore has now finished in double figures in 6 of 11 league contests. pic.twitter.com/sIkCbb9UJr

Although, the Bulldogs entered this game with a loss in overtime to Auburn, it was hard to tell because of their vibrant offense throughout the entire game against the Gators.  The red-hot Georgia offense was led by Caliya Robinson who scored 17 points and had 12 rebounds in yesterday’s contest. Guard Taja Cole scored 14 points and two other Bulldog players also scored in double figures for the game.

With this win, the Bulldogs move to 5-5 in the SEC and improve their home record to 11-2.

After this tough loss on the road, the Gators return back to Gainesville where they will host the South Carolina Gamecocks on Sunday at 2pm.  Florida has just two SEC wins on the season but both have come at home.

Previous Rams beat rival Hurricanes in a close one, 50-47
Next Gators Sweep Day 3 of USF Invitational