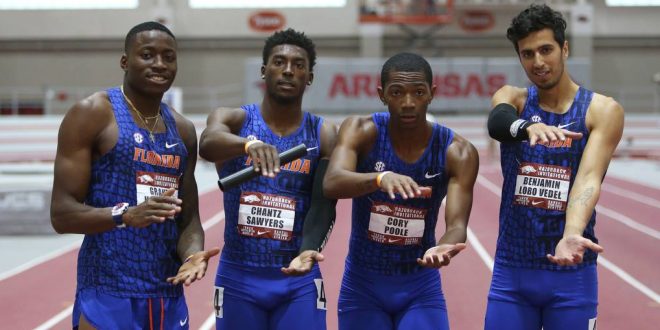 Scenes from the second day of the Razorback Invitational. / UAA Communications photo by Zach Dirlam

Gators Track and Field in Arkansas for SEC Indoor Championship

The Florida Gators men and women’s track and field teams are in Fayetteville, Arkansas, this weekend for the SEC Indoor Championships.

Last year, the men’s and women’s finished, third and sixth respectively. However, this season both are expected to pull titles with men sitting at No. 3 in the national rankings and women at No. 7.

The Gators have two reigning SEC Indoor Champions returning this year, Clayton Brown in the triple jump, and 2x champ Grant Holloway in the 60-meter Hurdles.

Returning medalists for the Gators are:

Three-student athletes will be leading their SEC events this weekend: Yanis David in the long jump, Grant Holloway in the 60 meters and 60-meter Hurdles, and Jessica Pascoe in the 5,000 meters.

Another five are ranked among SEC competitors:

What’s On the Line?

The junior will be competing in the 60 meters race where he’s a 2x SEC Indoor Champ and the third man in history to win consecutive titles in the event. In addition, he will compete in the 60-meter Hurdles where he currently holds the collegiate record (7.42). He will also participate in the long jump, and the 4×400 Relay alongside Kunle Fasasi, Benjamin Lobo Vedel, and Chantz Sawyers.

Yanis David has been a 2x SEC Indoors triple jump runner-up, and could possibly take another title in the event.

In addition, Jessica Pascoe is ranked No. 12 in the nation and leads the SEC by 37-plus seconds in the 5,000 meters race. She is expected to take the title for the event.

Events to Watch (all times Eastern)

I am a fifth-year journalism major, specializing in sports and media. My favorite sport to watch and cover are college and NFL football. When I'm not doing that, I enjoy hanging out with my cat, going to concerts and traveling.
@sportsabrina
Previous Florida Women’s Basketball Falls 69-51 at LSU, Drops to 6-20 On Season
Next Tampa Bay Lightning Continue Win Streak, Coming Back Against Sabres in Shootout Victory.