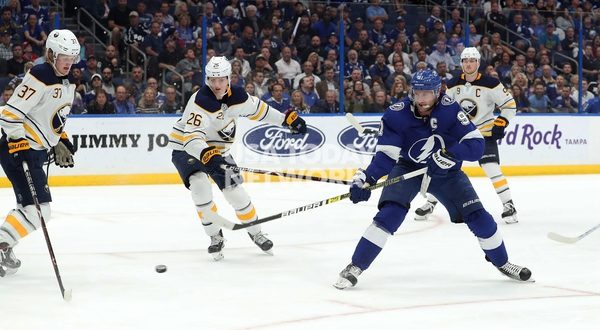 The Tampa Bay Lightning extended their dominance over the league yesterday after beating the Buffalo Sabres 2-1 in an overtime shootout.

Nikita Kucherov continues to make history in the NHL, this time reaching his 100th point this season against Buffalo. It only took him 62 games to reach the milestone, fastest player to reach the mark in league history. Not just that, but Kucherov is also the only Lightning player to put up 100 points in multiple seasons. Against the Sabres, Kucherov scored the only goal for Tampa Bay, as well as the winning shootout.

The first period was very much a tug of war between the Lightning and the Sabres. The impressive display of offensive talent was apparent on both teams. Brayden Point made a quick push for the net early in the match but was foiled by goalie Carter Hutton. The goalie was the Sabres’ best player on the ice, ending the game with 39 saves, stopping all but one of Tampa Bay’s 40 shots. Point attempted to capitalize on a turnover by Hutton, but the goalie ate up the onslaught of shots.

Pressure from the teams swapped throughout the first, with goalies Hutton and Andrei Vasilevskiy acting as brick walls. The only goal of the period came when Ryan McDonagh’s knee managed to redirect Sabre Rasmus Dahlin’s shot just enough to slip past Vasilevskiy’s shoulder.

WE'RE ON THE BOARD!

Dahlin gets the credit, and it's 1-0! pic.twitter.com/XtlVreGcBz

History Made in the Second Period

Tampa Bay started the second period aggressively, taking Buffalo by surprise. The Lightning did little with the advantage, however, having trouble to put points on the Sabres. Over-passing allowed Buffalo to push back with authority, with Jack Eichel stunning the Lightning defense for a time. Until halfway through the period, Buffalo was deciding the flow of the game until a key turnover led to a historical moment.

Nikita Kucherov became the only player in the Lightning franchise to score 100 points in multiple, consevutive, seasons.

Carter Hutton made a quick stop to the Lightning’s hopes of extending their lead. Hutton is the only reason Tampa Bay was kept to just one goal in regulation time. He ate up a power-play right after Kucherov’s goal, but couldn’t help the possession battle happening outside the crease. Tampa Bay held controlled the puck for 53% of the second period.

Momentum Moves Tampa Through the Third and Overtime

The Lightning controlled this period, having 73% of the shot attempts, but was shut down yet again by Carter Hutton. Tampa Bay dominated the ice but came up short when trying to make the most out of their possessions.

In overtime, a brawl broke out between Rasmus Ristolainen and Kucherov after got cross-checked high. Both players were sent to the penalty box following the scuffle.

Steven Stamkos of Tampa Bay started the shootout strong, scoring a goal on his first drive to the net. With Vasilevsky denying Buffalo any points, Kucherov scored the final goal, slipping past Hutton to put the dagger in the Sabres’ chances of winning the shootout.

The Tampa Bay Lightning are set to take on the LA Kings on Monday at 7:30 p.m. You can catch the broadcast live here on ESPN WRUF at 7.