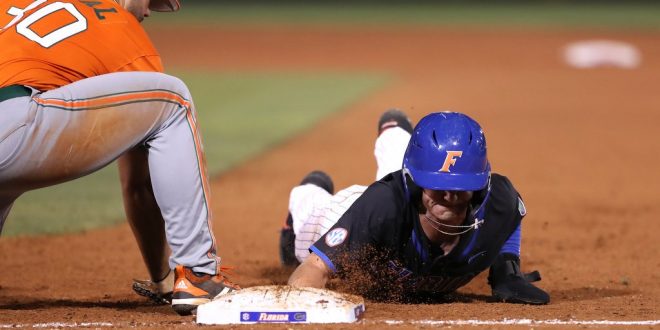 Saturday’s Gator baseball game against the University of Miami Hurricanes (5-1) looked like it was going to finish as another frustrating day for Gator hitters. Having scored just four runs in their three games this week prior to Saturday, Kevin O’Sullivan’s team was held scoreless until the bottom of the sixth.

One inning later the floodgates burst open at McKethan Stadium. Florida would score eight combined runs in the seventh and eighth innings to beat Miami 9-3 in front of a reported crowd of 6,206 people.

The win comes at a crucial time for the Gators. A loss would’ve given Florida four in a row. But the Gators showed their resilience and their composure. There was a high level of tenacity in the Gators’ performance on Saturday, and some key hits sparked real excitement for Gator fans at various moments throughout the game.

The Gators now have the chance to win a crucial home series against a rival opponent. That seemed nearly impossible when the Gators were down 3-0 in the bottom of the sixth inning Saturday.

Mace earns gritty victory after exiting on the hook

With a glance at sophomore starter Tommy Mace‘s (2-0) final stat line (7 IP, 3 ER, 5 H, 4 BB, 3 HBP, 4 K) one wouldn’t think that he provided the most dominant of performances. Mace was actually cruising until the top of the eventful sixth inning. Until that point, the 6-foot-6-inch righty had scattered two hits and three walks expertly.

He said after the game that he feels he is using most of his pitches to good effect.

Mace even opened the sixth with two strikeouts, but with two outs, he hit Adrian Del Castillo with a pitch. First baseman Alex Toral followed that up by drawing a walk to give Raymond Gil a chance at the plate. The bulky sophomore took Mace deep on a first-pitch cutter for a three-run shot.

It was a mile-high fly ball that cleared the left field wall and silenced the Gator fans at McKethan Stadium.

Rather surprisingly, Mace also came out for the seventh inning. It’s possible that O’Sullivan wanted to conserve his bullpen because he had to use no less than four pitchers in his team’s last four games. Regardless, Mace steadied himself to retire the side in order after opening his last inning with a hit by pitch.

O’Sullivan’s decision to stick with his starter helped both Mace and his bullpen. Freshman closer Nolan Crisp recorded his third save of the season with two innings of work to hand the Hurricanes their first loss of the season.

The final score would also lead people to believe that whoever the Hurricanes’ started on Saturday struggled. Quite the opposite.

Sophomore Chris McMahon was sensational against the Gators. Through six innings, he had only allowed one run on five hits to go along with six strikeouts.

Similar to Mace, but less so himself, he was partly guilty for his team’s two-out implosion in the seventh inning. McMahon issues his second walk of the game to catcher Brady Smith. Head coach Gino DiMare yanked his starter at that point with McMahon’s pitch count having reached 97.

After the game, Florida’s head coach heaped some high praise for the Hurricanes’ starter and also the way his team dealt with him.

While O’Sullivan’s decision to stick with Mace in the seventh was surprising, maybe DiMare’s choice to pull McMahon was even more shocking. Freshman lefty JP Gates relieved his teammate and couldn’t get any of the four batters he faced out. Two walks and two wild pitches later, junior right fielder Wil Dalton (2-4, 3 RBI, BB, R) would clear the base paths with a three-run triple.

That gave the Gators their first lead in nearly 36 innings of play.

The chaos that ensued at McKethan Stadium seemed to lift the Gators’ bats from that point on. They would tack on another five runs to their lead after Dalton’s big hit. Freshmen Kendrick Calilao (2-4 3 RBI, 2B) and Jud Fabian (2-4, R) were also at the heart of the eighth inning rally.

O’Sullivan said after the game that he knows his team is talented. He’s seen them hit consistently for months, so an early-season slump is something they just have to work through.

Still, Gator fans and the Gators’ coaching staff were surely relieved when Florida broke out of their alarming slump. With the benches having been cleared earlier in the game because of a couple tough slides at second base from both sides, Dalton said after the game that he and his teammates remained calm despite the added adrenaline. They just did it in such an explosive manner that almost made everyone forget all about it.

After the series finale, Florida will travel to Jacksonville on Tuesday followed by a game against UCF on Wednesday for their midweek games.

The Hurricanes, after just suffering their first loss of the season, will head back to Miami to play away to FIU on Wednesday.

Wil played with some passion tonight…guess he didn't want this feeling again. https://t.co/67DuWSJqnB