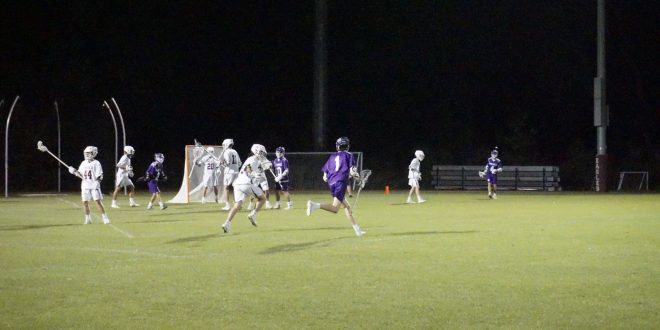 The Eagles got on the board first with an early score from Ben Moraski. It would be the first of three Oak Hall goals in what was a physical and fast-paced first period. The Eagles out-shot the Hurricanes as well by a three-shot margin.

Gainesville did manage to find the net in the first period with a goal by JT Hayes just before the end of the period to cut the Oak Hall lead down to 3-1.

The Eagles’ lead continued to grow after UNC commit and Captain Ryan O’Leary scored 37 seconds after the quarter break. A minute later, O’Leary returned the favor to fellow Captain Kyle Cox, who increased the Eagles’ lead to 5-1.

The scoring onslaught kept on coming for Oak Hall as the Eagles showed great ball movement and control. The majority of the half was played on the Hurricanes’ side of the field.

Despite the high-scoring first half, Gainesville goalie Greg Sulander made a pair of jaw-dropping saves, including a leaping stop on Moraski from point-blank range around the six-minute mark.

However, Oak Hall still finished the first half with a significant 10-1 lead with goals coming from Kyle Cox, Ben Moraski, Michael Moreschi and Brad Vincent, who scored twice. The Eagles also had 19 shots on goal to enter the half, 14 more than the Hurricanes had all game thus far.

Entering the second half, the Hurricanes swapped goalies by putting Myles Arnold into the game. On the other side, nothing changed for Oak Hall as Jacob Limon scored thirteen seconds into the second half. Two minutes later, O’Leary completed a trick by finding the net to increase the Eagles’ lead to 12-1.

With six minutes remaining in the half, O’Leary found the net again to make the score 13-1. Per rule, a rolling clock was also initiated as the Eagles’ lead had reached 12 points. By the time the third period ended, the score was 16-1 still in favor of Oak Hall.

O’Leary scored four goals coming within the last nine minutes of the third period, including one as the clock struck zero. Cox also found the net as well to contribute to the 19-1 final score. It was the Eagles’ third win of the season and the Hurricanes’ second loss.

The scoreboard also displayed the final shots on goal, with 32 by Oak Hall and just seven by Gainesville. To the Hurricanes’ Head Coach Evan Milch, however, he did not need to see the numbers to know what the team needs to improve on.

While he also cited other specific areas of improvement, Milch noted the importance of using this loss to help prepare for the team’s next game against their rivals, the Santa Fe Raiders.

“It’s obviously not what we want but we’ll regroup, come back tomorrow and we’ll be ready for Santa Fe on Wednesday,’ Milch said.

The Hurricanes’ game versus Santa Fe is at 7 PM at Citizens Park, while Oak Hall’s next game is against Maclay High on Thursday, February 28th.