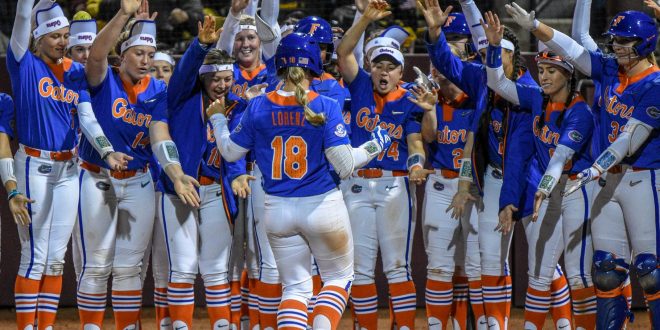 Florida softball was tested in the west and now comes back home for another one to begin the conference schedule.

The fourth-ranked Gators play host to the number seven Tennessee Volunteers for a three-game series to start their quest for a Southeastern Conference championship.

What Happened in California

Tim Walton’s squad competed in four games against Top 25 opponents including a pair of matchups with second-ranked UCLA. Florida dropped its two contests against the Bruins and nabbed one-run wins over Oregon and Washington.

Florida’s bats grew quiet out west. UF entered the week hitting under .250 in a game only once all season against Arizona on Feb. 9. It happened four separate times in California.

Kelly Barnhill still continued her dominance in the circle. She posted 19 strikeouts in 15 combined innings against Oregon and Washington. Natalie Lugo matched her career-high of 13 Ks in an extra-inning game against New Mexico.

Tennessee also went out to the Judi Garman Classic in Fullerton, California and finished 3-0. Its only games against Top 25 teams were canceled due to rain. But, the Vols will enter Gainesville on an eight-game winning streak.

The Vols’ three main pitchers all have struck out at least 45 batters this season. Ashley Rogers (53), Matty Moss (48) and Caylan Arnold (47) rank eight through 10 on the strikeout leaderboard in the SEC.

They have allowed the fewest hits out of any SEC team this season with 73 and are tied with Florida with 28 earned runs allowed. Each of the Vols’ pitchers own earned run averages below 2.00.

Offensively, the Vols pace the conference in batting average at .374 and on-base percentage with a .468 clip. Ralph and Karen Weekly’s team even boasts five different players batting better than .400.

One of them is senior infielder Aubrey Leach. She enters the weekend leading her team in hitting and on-base percentage with an astounding .519 average and .630 OBP.

Freshman Kaili Phillips leads the team in slugging percentage (.900) and her six home runs pace the squad too.