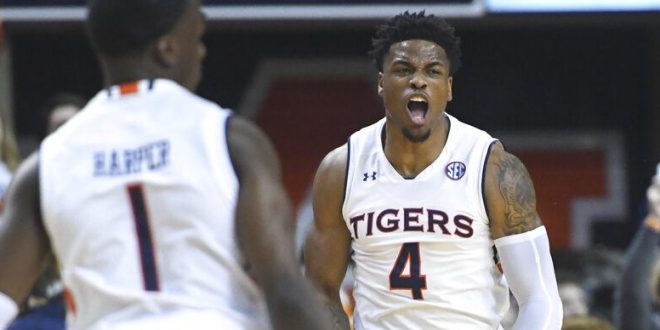 Auburn player Malik Dunbar (4) celebrates a 3-point basket over Tennessee during the first half of an NCAA college basketball game Saturday, March 9, 2019, in Auburn, Ala. (AP Photo/Julie Bennett)

The second round of the SEC tournament tips off Thursday with four games in Nashville. The second matchup of the day features the 12th seeded Missouri Tigers battling the 5th seeded Auburn Tigers.

Both Tiger teams enter the matchup having very different seasons. On one hand, the Auburn Tigers have expectations of a deep NCAA tournament run and are currently ranked 22nd in the nation. On the flip-side, Missouri has struggled this season. Mizzou limped into the SEC tournament with a 15-16 record.

It's SHOWTIME in the Music City! #WarEagle x #UnfinishedBusiness pic.twitter.com/kztVZzKqkt

Missouri bested Georgia on the tournaments opening day, winning the 12 vs. 13 matchup 71-61 for the right to play Auburn.

The two teams faced once in the regular season with Auburn blowing out Missouri 92-58 in Auburn. In that contest, Jared Harper led all scorers with 16 points for Auburn while Chuma Okeke recorded a double-double.

Missouri has struggled greatly since the January 30th defeat. Mizzou has gone 5-7 since the defeat and finished 5-13 in conference play. Auburn, meanwhile, has won six of its last seven games, including a win over number five Tennessee to end the regular season.

The 22nd ranked Auburn team is a high-scoring, fast-paced bunch. Lead by Bryce Brown at guard averaging 15.5 points per game, the Tigers average 81 points per contest good enough for 32nd in the nation.

This will be a tall task for a Missouri team that has struggled to score in the 2018-2019 season. Missouri averages 67.1 points per game and has struggled in higher scoring games.

However, the defensive side of the ball is where Missouri can be dangerous. Mizzou allows only 67.3 points per game, good for 66th in the nation. This could potentially pose problems for Auburn.

The winner of the matchup will get a date with the fourth seed, Sout Carolina. Missouri is 1-1 against the Gamecocks this season, winning the latter matchup 78-63. Auburn lost its only matchup with South Carolina, losing 80-77 back in January. 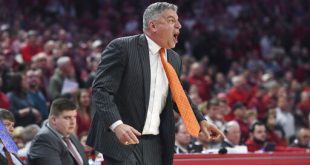