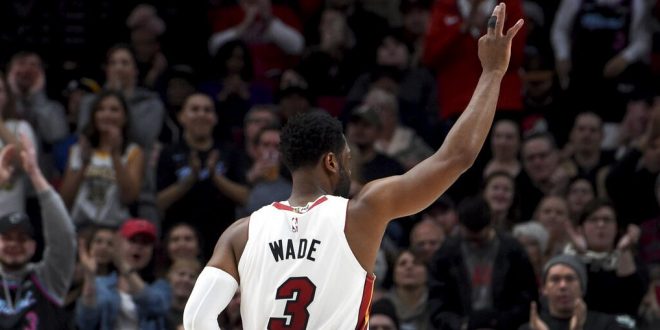 Miami Heat guard Dwyane Wade acknowledges the crowd as he enters during the first half of the team's NBA basketball game against the Portland Trail Blazers in Portland, Ore., Tuesday, Feb. 5, 2019. This will likely be his final game in Portland as he is set to retire at the end of the season. (AP Photo/Steve Dykes)

The Heat coasted to a win last night against the Detroit Pistons, defeating them in American Airlines Arena 108-74 for their largest win of the season.

Although six players scored in double-figures for the Heat, it was Justice Winslow who continued his high level of play and led the team with 16 points, five rebounds, two assists, and two steals. Winslow has been on fire lately, and last night was no different.

Shooting 7-for-11, Winslow got just about anything he wanted.

As good as Winslow played, it was Bam Adebayo who got the Heat rolling in the 1st quarter, converting on an and-one to put the Heat up 6-0.

The Heat rode out the rest of the quarter shooting just under 67% (12-18), and lead the Pistons by 12 going into the second quarter.

The Heat would extend their lead by as much as 13 in the second quarter, but the Pistons rally back a bit and cut it to five before the half.

9 guys in the scoring column after 24 minutes of action! Check out how they contributed to our 54 – 49 lead! pic.twitter.com/LMzBrCN2cu

The Heat played one of the best quarters of their season, opening it up on a 10-0 run and finding their largest lead of the game with 6 minutes left in the quarter. Miami ended the quarter outscoring the Pistons 33-8, tying the lowest scoring quarter for an opponent this season. They also capped off the amazing quarter with a buzzer beater by Goran Dragic.

After an amazing 3rd quarter, the Heat never looked back, putting on an absolute show for the home crowd and defeating the Pistons by 34 points.

Heat shooting guard Dwyane Wade credited the win with the team’s ability to lock down the three, especially in transition.”It’s a change in the game and we have to try to get to that adjustment.”

This win helps the Heat continue their playoff push, as they are currently 2 games back from the Pistons for the seventh seed. The Heat face off against a tough Bucks team tomorrow night at 8:00 pm in American Airlines Arena.