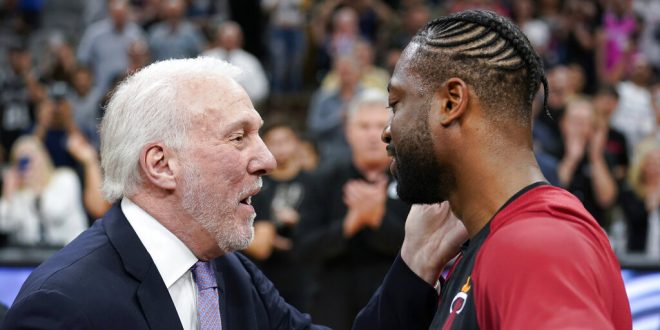 Winning three games in a row, the Miami Heat and Orlando Magic are continuously fighting for a playoff spot. Miami (8th, 35-36) beat the red-hot San Antonio Spurs 110-105 on the road, while not too far behind Orlando (9th, 34-38) steamrolled over the New Orleans Pelicans 119-96 at home.

Execution Down the Stretch

Miami’s win versus San Antonio almost turned into another signature late-game blown lead. However, a clutch basket off the backboard from Dwyane Wade and a few defensive stops gave the Heat the edge. Miami has now swept the season series with San Antonio for only the third time in franchise history, ending the Spurs’ nine-game winning streak overall in the process. Additionally, it was only the fourth-ever regular-season victory against the Spurs on the road.

Erik Spoelstra’s team led by as many as 18, but the Spurs second-half shooting from long range (9-18 FG) brought them within three with 1:07 left in the game. Wade’s stealthy steal from behind on guard Demar DeRozan sealed the game with eight seconds to play. After the game, DeRozan and Wade exchanged jerseys and posed for a picture.

The Heat opened with a 2-3 zone to stop San Antonio’s perimeter shooters. On the other side of the court, Miami turned up the flame.

Miami shot 16-of-35 from beyond the arc and over 46 percent overall. Goran Dragic had 22 points in 22 minutes and the Heat bench had three players in double figures — James Johnson, Hassan Whiteside and Wade.

Orlando led by as many as 35 points at the Smoothie King Center. The New Orleans Pelicans had already lost by more than 30 against Steve Clifford’s team earlier this year. This time, all-star Anthony Davis did not play.

“It’s just a terrible matchup for us, for some reason,” Pelicans fourth-year coach Alvin Gentry said of the Magic. “Our two worst losses this year have been against them, really. They’ve both been 30-point games – I don’t really care what the stat sheet says, it was a 30-point game (Wednesday). I’m not really sure why we can’t match up with this team, or why we can’t seem to score against this team.”

Evan Fournier, Aaron Gordon, Terrence Ross and Nikola Vucevic combined for 76 of the team’s points, shooting over 50 percent. Vucevic and Jonathan Isaac added 27 rebounds and seven blocks to the mix. Orlando carried a 22-point lead at halftime and the Pelicans shot just over 37 percent for the game.

Or in English, ‘Why not both?’ Miami is 8-2 in its last 10, pushing within 1.5 games of the Detroit Pistons and one game behind the Brooklyn Nets. Meanwhile, Orlando is 1.5 games behind its state rival and two games ahead of the Charlotte Hornets. Miami’s success versus its difficult remaining schedule and Orlando’s relatively light schedule may mean both teams can make a postseason run.

The two playoff hopefuls will play each other in Miami on Tuesday, March 26. Orlando is 2-1 versus its South Florida rival this season, winning one at home and away.

Miami jumps right into another battle with a playoff team Friday night. Erik Spoelstra’s team will battle with the Milwaukee Bucks in a potential look at a first-round matchup in the NBA playoffs. Furthermore, the Heat will play the second leg of back-to-back games versus the Washington Wizards in a Southeast Division game.

Meanwhile, Orlando will remain at the Amway Center for the next two games, taking on the struggling Memphis Grizzlies on Friday and the star-studded Philadelphia 76ers on Monday.