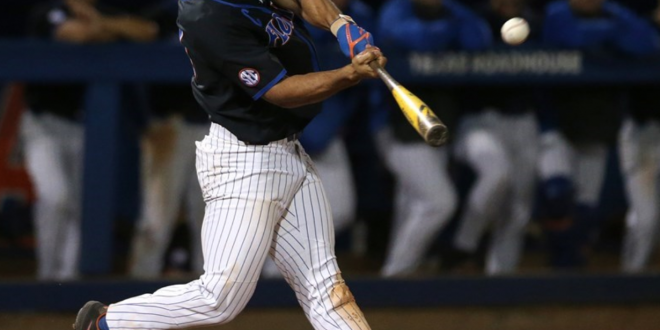 Florida’s baseball team (16-7; 1-2 SEC) surely didn’t open their SEC season the way they would’ve liked. Last weekend, they were brushed aside by Mississippi State (20-2; 2-1) in the first two games of the home series before salvaging the finale 4-2.

But since then Kevin O’Sullivan’s team has rebounded admirably.

Following Sunday’s win, they collected another victory against the Jacksonville Dolphins on Tuesday by a score of 13-8. Although the Gators’ bullpen allowed eight runs in five innings, Florida’s offense kept them in front through all nine frames.

Thursday, they’ll be on the road for the first time this season to once again face an SEC opponent in the Vanderbilt Commodores (16-5; 1-2). Like Florida, Vanderbilt lost their opening series of SEC play to Texas A&M.

More than 20 games into the season and these two teams are neighboring each other in the SEC – East standings. Yet Florida, by comparison to Vanderbilt, has a much younger squad.

It’ll be a challenge for Florida to go on the road to an SEC ballpark and face a more experienced team. Still, some Florida’s freshmen have already proved they might be up for the task.

Outfielder/second baseman Jacob Young was moved into the leadoff spot of the Gators’ order against Winthrop on March 1. He’s made a solid impact since that promotion (22-54, 12 RBI, 18 R).

Moreover, first baseman Kendrick Calilao (.346, 3 HR, 28 RBI) was just named SEC Freshman of the week for the second time this season. He racked up four hits and six RBI’s in the 20-6 against Florida State on March 12 and mustered another two RBI Tuesday. Calilao has been a strong, steady presence in the middle of the Gators’ order as some of their other older hitters begin to heat up now.

Senior captain Nelson Maldonado has been on a recent tear. He’s riding an eight-game hitting streak and has three hits in each of Florida’s last two games. Brady McConnell and Austin Langworthy both homered for the first time this season in Tuesday’s win.

Florida will face the toughest pitcher of the series on Saturday in Raby. The right handed senior has allowed just two earned runs through 25.2 innings of work this season. Opposing hitters are slashing just .172 against him.

Both teams’ offenses come in averaging just over eight runs per game. Hence, the performance of those on the mound might essentially decide this series.

Junior Tyler Dyson (3-0, 3.42 ERA) will start Game 3 for Florida. The junior is coming off his best performance of the season last Sunday. Vanderbilt is yet to name their starter for Saturday’s finale.

In Florida’s six losses this season their pitching staff is allowing almost nine runs per contest. They’ll have to contend with a dangerous Commodores’ lineup.

Vanderbilt’s top three hitters, sophomore Austin Martin and seniors Ethan Paul, and Stephen Scott, all sport batting averages of over .400 in no fewer than 69 at bats. They’re usually fixtures in the middle of Vanderbilt’s lineup.

Leftwich and Mace were both tagged for their first losses of the season last weekend. How the sophomores bounce back from those performances will be one of the keys to watch.