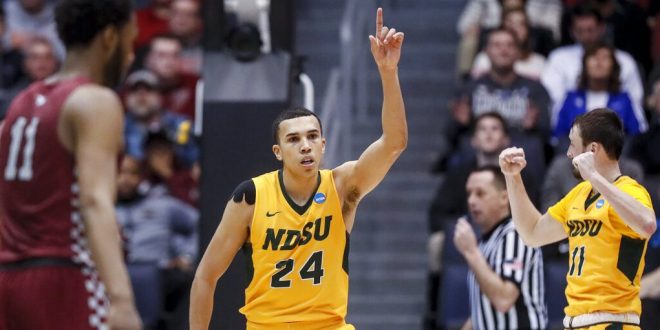 March Madness. Its a crazy time for fans, schools, companies, analysts, and student-athletes. What makes it so special is that any team can win. Just last year UMBC proved that even the 16th seed has a chance.

However, often overlooked are the “First Four” games played just before the round of 64, finishing off the seeding and locking in the bracket. Last night, two 16 seeds battled it out for the chance to play Duke in the first round, and just like any game in the tournament, only one team came out with their dream still alive.

On Wednesday night NC Central played in their third consecutive First Four game, However, the third time was not the charm. They fell to North Dakota State in a close game with a final score of 78-74.

NC Central appeared to be in control of the game in the final minutes, with Larry McKnight Jr. hitting a big three to put the Eagles up 66-61 with 5 minutes left to play.

The game was not over, however, and NDSU hit 6 straight free throws and a huge three-point bucket to lock the game up at 68. From there the Bison never looked back, going on a 17-8 run the rest of the way.

Although McKnight hit some big shots for NC Central, scoring 15 of his 20 points in the second half, it was Tyson Ward who electrified NDSU.

Head coach LeVelle Moton was emotional during the post-game interview, explaining how his heart went out to the seniors on the team and how tough it is to be on the brink of history and lose. “Just the fact it’s their last game … our locker room is like a funeral home right now.”

“These kids – they become your children… They’re part of our family.”

NC Central’s @LeVelleMoton gets emotional when talking about his seniors after a tough loss in the #FirstFour. #MarchMadness pic.twitter.com/rPYPbXWyv9

Ward had 23 points in the win, scoring seven in a row down the stretch to help the Bison push the lead to 5 with a minute left.

THR33!! Deep trey at the lights from Randy Miller Jr. cuts the lead to three for #NCCUMBB, 56-53!#3aglePride #MarchMadness pic.twitter.com/gQcuCFwebO

7 Bison have scored in the first 12:32. Jared Samuelson just hit his 3rd three.

North Dakota State will look to upset no. 1 Duke in the first round of the NCAA Tournament on Friday in Columbia, SC at 7:10 pm

The opportunity of a lifetime. #MarchMadness pic.twitter.com/W5rfFOLeSV