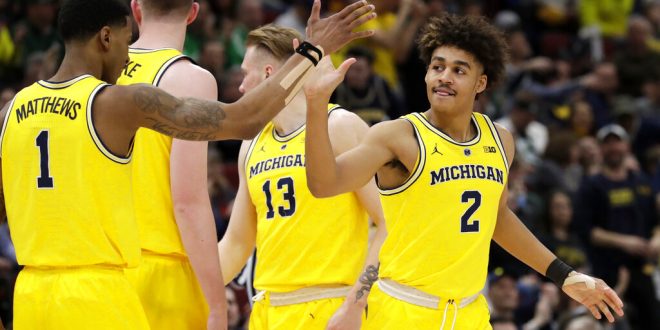 Michigan's Jordan Poole (2) celebrates with his teammates during the second half of an NCAA college basketball game against Iowa in the quarterfinals of the Big Ten Conference tournament, Friday, March 15, 2019, in Chicago. (AP Photo/Nam Y. Huh)

Two-seed Big Ten runner-up Michigan takes on the Big Sky champion 15-seed Montana Grizzlies at 9:20 in the tournament’s first round. If Florida defeats Nevada in the site’s first game, this matchup determines its next opponent.

In short, the best team in the Big Sky Conference. The Grizzlies enter the tourney as their conference’s regular season and postseason champions.

Also, it is the same exact team Michigan bounced out of the Round of 64 in the 2018 tournament. Montana returns four of its five starters from the 2017-2018 squad including its leading scorer, distributor and rebounder.

Here are some players to watch for the Grizzlies tonight:

Montana’s junior guard in Pridgett upped his scoring output this season 8.4 PPG. However, Rorie’s scoring dipped but made up for it through increasing his contributions in rebounds and assists.

Furthermore, the Grizzlies led the Big Sky in scoring defense (68.3 PPG) while pacing the conference in field goal percentage (.497) and three-point percentage (.380) as a team.

Michigan enters the tournament after making a run all the way to the national title game in 2018.

Gone are the likes of Moritz Wagner, Jaaron Simmons, Muhammad-Ali Abdur-Rahkman and Duncan Robinson. All that remains in terms of major minutes for the Wolverines are Charles Matthews and Zavier Simpson. Outside of that are sophomore guard Jordan Poole, Isaiah Livers and Jon Teske who recorded double digits last season.

“We don’t look past anybody and they’re ready to play every day,” Beilein said.

But recruiting additions like Ignas Brazdeikis have helped fill the holes. He’s Michigan’s leading scorer this season at 15.1 points per game and averages over five rebounds a contest.

Simpson’s advice for the younger players: